WATCH: Joan Jett and the Blackhearts Share "Together Apart" Version of "I Hate Myself for Loving You"

The rock legends have dropped their second tune recorded while sheltering in place.
Tags
Joan Jett and the Blackhearts
I Hate Myself for Loving You
coronavirus 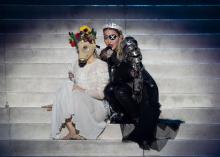 Madge is stepping up to do her part to fight back.
Tags
Madonna
coronavirus
COVID-19

The Grammy-winning singer-songwriter, best recognized for his 80's hits "Arthur's Theme (Best That You Can Do) and "Sailing," shared the news on his Facebook.
Tags
coronavirus

Fountains of Wayne's Adam Schlesinger Hospitalized Due to Coronavirus

According to his lawyer, Schlesinger has been receiving good care at a hospital in upstate New York. We are sending him our very best well wishes.
Tags
coronavirus

Alan Merrill, co-writer and singer of the original version of "I Love Rock 'n' Roll" died at the age of 69 on Sunday.

“What happened in China, in Europe, it came here. So if we don’t save our brothers there, it’s going to come home. It’s all of us. All of us are in this together."
Tags
USA for Africa
Lionel Richie
We Are the World
coronavirus
COVID-19
Subscribe to News