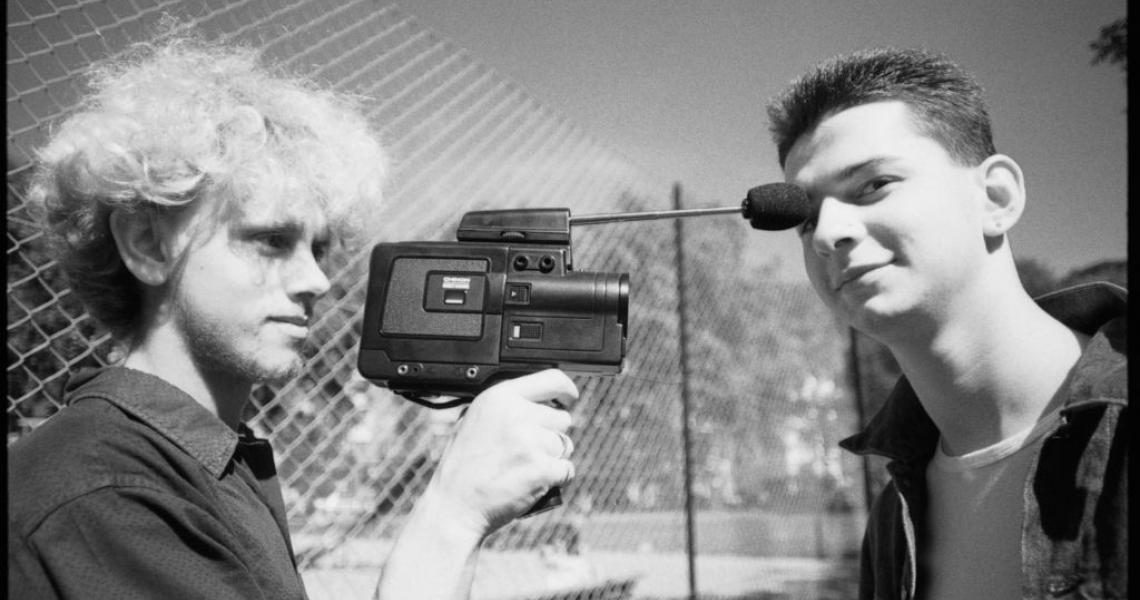 On July 23, 1961, Martin Lee Gore was born in London, England, raised by his mother, Pamela, and his stepfather, David Gore, who - as his name implies - adopted him at some point. Oh, but you don’t want to hear about his family, you want to hear about his music! That’s why we’ve put together a collection of some of the best songs that Gore’s written for his band, Depeche Mode, over the course of their long career, and we’ve shined a spotlight on one per album. Oh, and there’s even a bonus track for those of you who keep reading ‘til the bitter end, so...keep reading!

“Big Muff” (from Speak & Spell, 1981): As any good Depeche Mode fan knows, the band’s first album was predominantly written by founding member Vince Clarke, who departed their ranks in the wake of this LP. That said, Speak & Spell also featured two songs by Gore, and while “Tora! Tora! Tora!” may have featured vocals by Gahan, which is always a plus, this instrumental is a real corker and well deserving of a moment in the spotlight.

“See You” (from A Broken Frame, 1982): With Clarke now out of the picture (at least as far as Depeche Mode was concerned, anyway), Gore had little choice but to step up as the predominant songwriter of the band, and he certainly kicked things off in a big way, delivering this track, which rose to No. 6 on the U.K. singles chart.

“Everything Counts” (from Construction Time Again, 1983): From the band’s third album, their first to include Alan Wilder as a member, this track was the LP’s first single, and it was described at the time by New Musical Express as the band’s “best ever single...because it combines edgy and poignant melodies held in thrilling tension; a tough, urgent dancebeat; and a gleamingly modern sound with an element of quirkiness to mark it out in the crowd.” The song has actually had two lives on the charts: the studio version hit No. 6 on the U.K. singles chart, and when it was released as a single from the band’s 1989 live album, 101, it rose to No. 22. (Both versions also entered the top 20 of Billboard’s Hot Dance Music/Club Play chart.)

“People Are People” (from Some Great Reward, 1984): Otherwise known as the beginning of the band’s breakthrough in America, this classic single hit No. 4 in the U.K., but it brought Depeche Mode into the top 20 for the first time ever in the States, making it to No. 13 and introducing them to a huge new audience.

“A Question of Lust” (from Black Celebration, 1986): The “none more black” joke in This is Spinal Tap emerged well before this album did, but it’s certainly applicable, as it was the darkest synthpop delivered by Depeche Mode up to this point. That said, this song was and remains one of the sweetest tunes in the DM catalog, with Gore taking lead vocals and doing so beautifully.

“Never Let Me Down Again” (from Music for the Masses, 1987): NME described this first single from the band’s sixth studio album as “an intriguing masterpiece, combining homo-eroticism with drug euphoria.” Sure, let’s go with that. It’s as good a description as any. Lest we forget, though, it’s also just a really great song.

“Enjoy the Silence” (from Violator, 1990): From the band’s biggest album up to that point (and their first to debut within the Top 10 of the Billboard 200), this song is considered by some to be the best single ever released by the band, and while we wouldn’t want to be pinned down quite that much, we’ll happily say that it’s one of the defining singles of their later career and one that holds up tremendously well.

“I Feel You” (from Songs of Faith and Devotion, 1993): It’s not as anyone actually asked Depeche Mode to go grunge, and that’s good, because they couldn’t pass for Seattle residents if their lives depended on it; that said, this is a grinding rock track that’s about as angry and powerful as anything in their catalog, and it definitely served to help keep the band relevant despite the changing music scene around them.

READ MORE: November 1993: When Martin Gore of Depeche Mode Got Arrested in Denver

“Home” (from Ultra, 1997): Some might selection “Barrel of a Gun” or “It’s No Good” as the definitive track from this LP, but we decided to go with this Gore-sung track, which Billboard praised highly upon its release. "The latest single from Ultra shows the venerable electronic group in a predictably melancholy mood,” wrote Larry Flick. “But who cares? Few acts can dish out the angst better, and ‘Home’ pleases with its baroque strings and skittling beat...this is certainly the act's best mainstream single in a good long time."

“Dream On” (from Exciter, 2001): When Eric Aiese of Billboard reviewed this single, he said, “It’s hard to remember the last time the group did anything so organic, and ‘Dream On’ proves to be surprisingly refreshing. The guitar line is a catchy head-bopper, and the minimal melody sounds like a winner.” Indeed, it was: it hit No. 6 in the U.K. as well as on Billboard’s Adult Alternative chart.

“Precious” (from Playing the Angel, 2005): The lead single from the band’s 11th studio album, the track also hit No. 6 on the Adult Alternative chart, but more impressively, it managed to earn placement on the second Smallville soundtrack, which is nice work if you can get it. In the U.K., however, it was a top 5 hit, ascending to No. 4.

“Wrong” (from Sounds of the Universe, 2009): Proving the band’s endure popularity, this track actually topped the charts in Scotland as well as the Billboard Dance Club Songs chart. Weirdly, though, it only hit No. 24 on the U.K. singles chart and No. 38 on the Billboard Hot Rock & Alternative Songs chart. Go figure.

“Soothe My Soul” (from Delta Machine, 2013): From the band’s first album for Columbia Records, this track was the LP’s second single, and while it did rather dismally in the UK, only making it to No. 88, it was a No. 1 hit in Hungary and hit No. 7 on the Billboard Dance Club Songs chart.

“Where’s the Revolution” (from Spirit, 2017): Hard to believe that Depeche Mode hasn’t released an album since this one. This single hit No. 40 on the U.S. Alternative Airplay chart and No. 3 in Hungary, which just goes to prove our theory: Hungarians love Depeche Mode.

BONUS TRACK: “Mandrill” (from The Third Chimpanzee EP, 2021): Just because Depeche Mode hasn’t released anything new since 2017 doesn’t mean that Gore’s been sitting idly by. Indeed, he released a new EP earlier this year, including this track.