Seriously, NOTHING Could Stop Starship 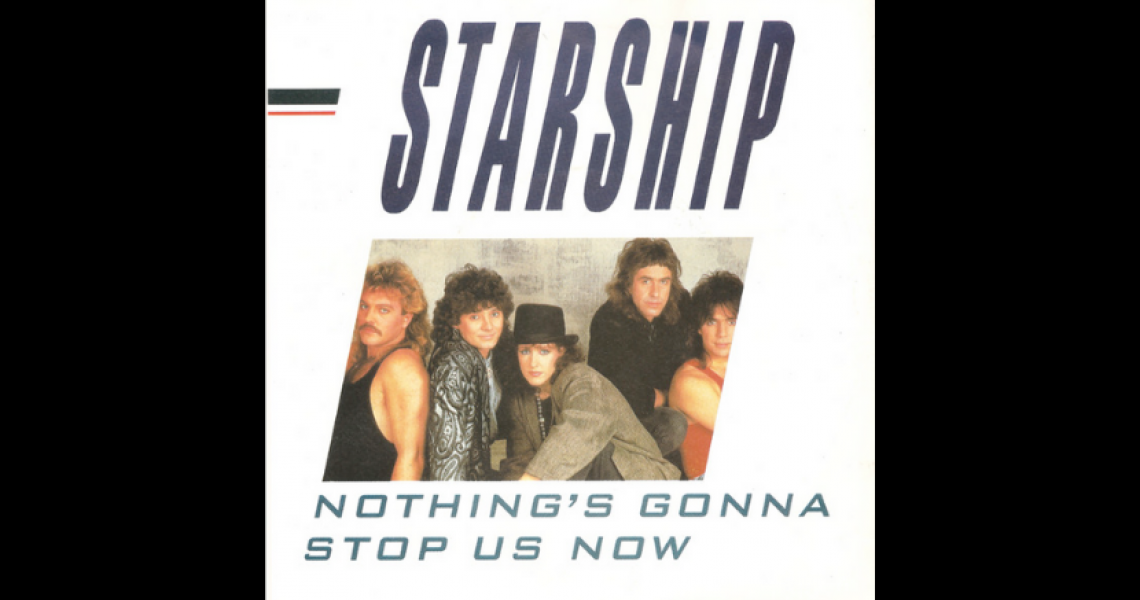 If you were in the crowd at Woodstock having your mind elevated by Jefferson Airplane's performance, you might have thought you were still tripping when you heard what members of the band were up to two decades later. The group had gone through many changes, reconvening as Jefferson Starship in the '70s and rebranding as Starship in the mid-'80s - and one of Starship's biggest hits was worlds away from the Airplane experience. We're talking, of course, about "Nothing's Gonna Stop Us Now," that timeless power ballad that topped the Billboard Hot 100 on April 4, 1987.

The roots of "Nothing's Gonna Stop Us Now" lie with two major songwriters who had nothing to do with the band. Albert Hammond had written hits in the '60s, '70s and '80s like his own "It Never Rains in Southern California," The Hollies' "The Air That I Breathe," and Julio Iglesias & Willie Nelson's "To All the Girls I've Loved Before." In the mid-'80s, he was celebrating for an entirely different reason: after a painful, years-long divorce, he was about to finally tie the knot with a new girlfriend. He shared his joy with a friend and fellow songwriter, Dianne Warren, who'd recently broken into the mainstream with her composition "Rhythm of the Night," a big hit for DeBarge.

"It's almost like they've stopped me from marrying this woman for seven years, and they haven't succeeded," he'd later recount. "They're not gonna stop me doing it." From that sentiment came a driving, upbeat ballad meant for two voices who'd come out on top in the game of love, no matter the odds. Those two voices, unexpectedly, turned out to be Starship's founding vocalist Mickey Thomas and Grace Slick, who'd stuck with the group since the Airplane days. Their upbeat repartee propelled Starship's first two singles - the deathless "We Built This City" and "Sara" - to the top of the Billboard Hot 100.

READ MORE: Is "We Built This City" THAT Bad?

And Starship had a few more aces up its sleeve for "Nothing's Gonna Stop Us Now." For one, there was the polished production of Narada Michael Walden, who'd honed his skills on tracks for Whitney Houston and Aretha Franklin. (Walden also recruited his protegee Walter Afanasieff to play keyboards; he'd later become a key collaborator to Mariah Carey and Celine Dion.) The second key to success was placement in a movie that was, if not "hotly anticipated," at least moderately successful. Mannequin, a comedy where a an artist (Andrew McCarthy) falls in love with a possessed department store mannequin (Kim Cattrall), not only featured the song in the film, but several of the movie's stars appeared in the video alongside the band.

While it didn't do anything to convince haters who thought the former Airplane were coming in for a soft landing, "Nothing's Gonna Stop Us Now" became a No. 1 hit in America, Canada and the United Kingdom, becoming the year's biggest seller in the latter country. It was Warren's first chart-topper as a writer and netted her the first of a whopping 13 Oscar nominations, as well as Grammy and Golden Globe nominations. It also made history for over a decade by making Slick - whose next move was to depart the band - the oldest woman to score a No. 1 hit, at 47 years old. (Cher would break the record in 1999 with "Believe.")