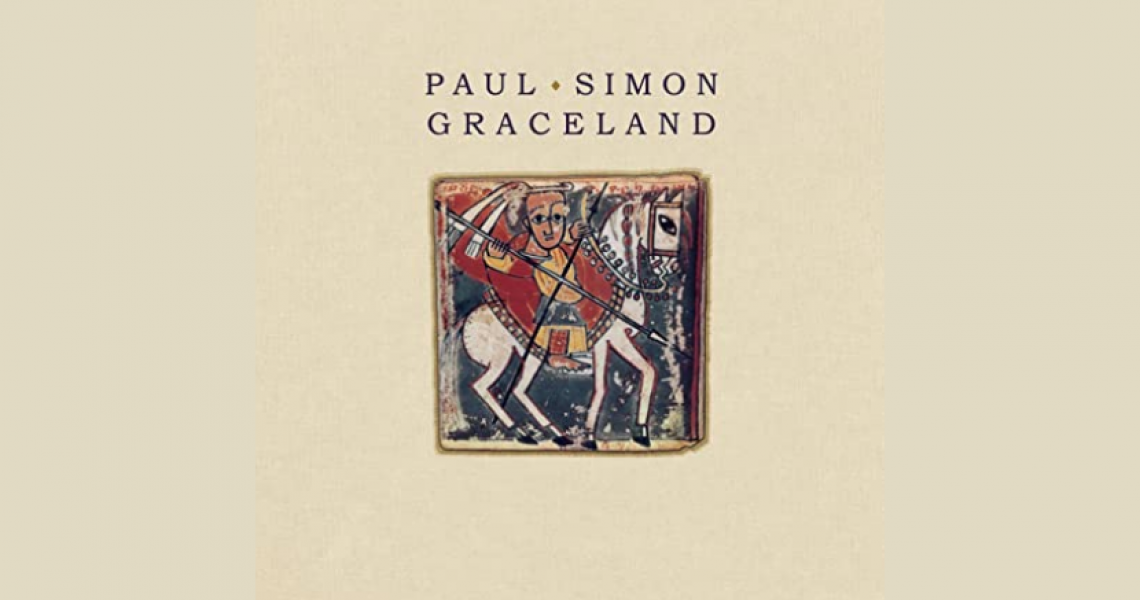 The singer-songwriter's landmark LP immediately sparked controversy as the musical diplomat ignored the United Nations Anti-Apartheid Committee and its international boycott of South Africa to intentionally engage with Black musicians who were ruled by apartheid.

The album was both groundbreaking and problematic - and  became Simon's biggest-selling album of his solo career. Tune in here for 5 facts you should know about Simon's most sociopolitical album below.

5. It all began with a bootleg cassette tape.

Heidi Berg, the former bandleader of The New Show, and Paul Simon became fast friends through television titan Lorne Michaels. Impressed by her music, Simon offered to produce an album for her and the two began to frequently meet at Simon's New York apartment to swap ideas.

On one of these occasions, she handed Simon her most beloved cassette, labeled "Accordion Jive Vol. II," filled with mbaqanga, or exuberant street music from Soweto, Johannesburg. A couple days later, Simon was hooked.

“It was very good summer music, happy music," he reminisced to Rolling Stone. "It sounded like very early rock & roll to me, black, urban, mid-Fifties rock and roll, like the great Atlantic tracks from that period,” he remembered. “I was listening to it for fun for at least a month before I started to make up melodies over it. Even then I wasn’t making them up for the purpose of writing. I was just singing along with the tape, the way people do.”

4. Simon sought the advice of Quincy Jones and Harry Belafonte.

Given the UN's 1980 prohibition of South Africa, the headstrong Simon knew collaborating with South African musicians was illegal and sought the advice of civil rights activist and musical experts Quincy Jones and Harry Belafonte. While both encouraged his ideas, Belafonte urged Simon to first speak to officials within the African National Congress, but Simon was too antsy to wait around.

"“It’s like having your dad tell you not to take the car on a date you really want to go on,” he confessed in Under African Skies. “You take the car anyway.”

3. The hardships of apartheid could be felt from within the studio during recording sessions.

Still the immense racial tensions of apartheid trickled through during the recording sessions, particularly when recordings went late and the musicians grew stressed about finding a safe  ride home.

"There was a surface tranquility, but right below the surface there was all this tension,” Simon recalled to Rolling Stone in 1986. “For instance, we would begin recording sessions at noon, and we would stop when we got a finished track. So a session could go past dark. But once it gets past dark, the musicians have to figure out a way home. They couldn’t use public transportation. They are not allowed to be on the streets of Johannesburg after curfew. They would have to show papers, and it was something they clearly didn’t want to have to do."

He continued, "So always around six or seven o’clock, there would be an uncomfortable time when the players couldn’t concentrate until they knew there might be a car to take them home.”

2. The title for "You Can Call Me Al" drew inspiration from a funny faux pas during a party.

Years back, Simon crashed a party with his then-wife Peggy Harper, where they linked up with the French composer Pierre Boulez for a casual chat. When Boulez bid Simon adieu, he politely tapped Simon on the shoulder, informing him, "Sorry I have to leave, Al. And give my best to Betty."

The faux pas became a beloved inside joke between the two as they continued to refer to eachother by their new nicknames, and became the lyrical inspiration behind the tune "You Can Call Me Al."

1. Linda Ronstadt's vocal cameo in Graceland track "Under African Skies" only fanned the flames of the album's controversy further.

Though Simon recruited Ronstadt to infuse her childhood memories of the American Southwest and liken then to the beauty of an African sunset in a message of unity, her former performances in South Africa still remained an issue of condemnation and only brought further blame to Simon. Billboard critic Nelson George even compared Simon's choice to recruit Ronstadt to "using gasoline to put out birthday candles."