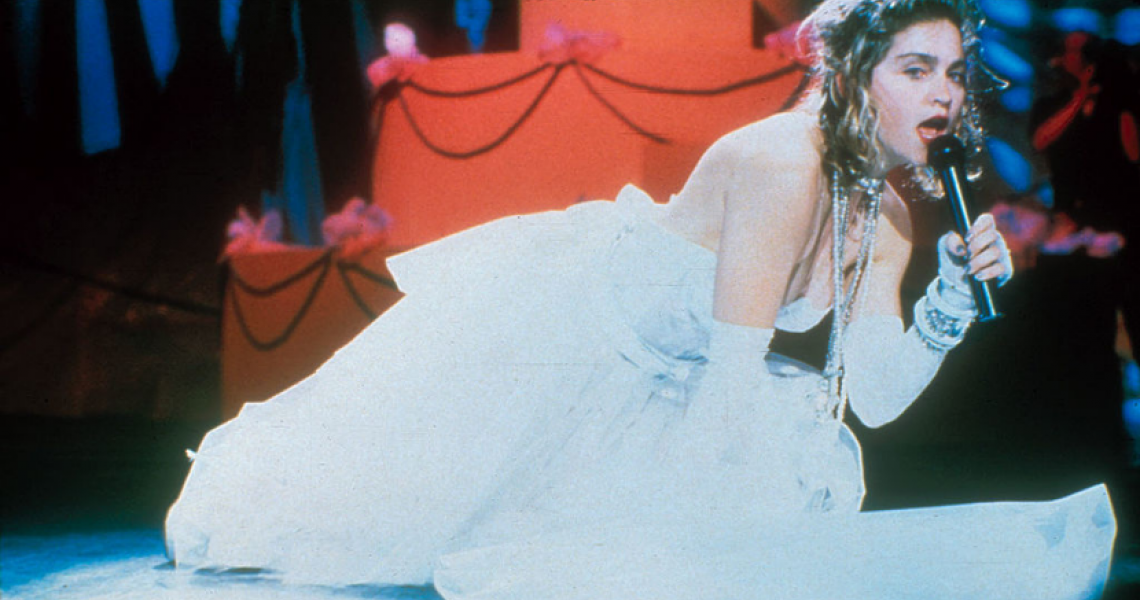 Given how many years people have been making the joke about how MTV should change their name because of how little music they actually play, it may surprise some readers to learn that the MTV Video Music Awards are still an ongoing concern, Indeed, not only are the VMAs still held annually, they’re actually being held this very Sunday, Sept. 12 at New York’s Barclays Center, hosted by Doja Cat - but before you can ask who Doja Cat is, we thought we’d share our list of 10 memorable MTV Video Music Awards moments from the ‘80s.

Madonna performs “Like a Virgin” (1984) – If anyone could instantly make the VMAs into must-see TV, it’s the Material Girl, whose performance is so legendary that either you can immediately picture it in your mind’s eye or you’ve never seen it before...and if you’ve never seen it before (or even if you have), you should watch it right this second.

READ MORE: September 1984: Madonna Performs "Like a Virgin" at the 1st MTV VMAs

David Bowie’s VMA for “China Girl” is accepted by the man who first recorded the song (1984) – For no discernable reason except possibly because they were both popular and hot, Belinda Carlisle and Kathy Valentine of The Go-Go’s award the Best Male Video to Bowie’s “China Girl,” but in lieu of the Thin White Duke himself, they instead present the award to none other than Iggy Pop, who first recorded the song for his 1977 album, The Idiot.

Eddie Murphy delivers an unfiltered opening monologue (1985) – “You know, I wasn’t going to host the show,” explained Murphy in the opening moments of his stint hosting the ’85 VMAs. “They came to me about six months ago and said, ‘Eddie, host the MTV Awards!’ And I’m an actor, so my first reaction was, ‘Fuck MTV!’ I wasn’t gonna do this. And then I did a music album that hasn’t come out yet, so now I’m here kissing MTV’s ass...like most of you!” Plus, in the middle of a crowd of some of the world’s most famous musicians, he also talked about rock stars getting venereal diseases on the road, suggesting that anyone who wasn’t laughing at the joke probably had one. Classic Eddie.

READ MORE: May 1985: Eddie Murphy Releases "Party All The Time" As a Single

a-ha wins eight VMAs with two songs (1986) – ’86 was a big year for Dire Straits in terms of nominations, but after being nominated in 11 different categories, they ultimately only walked away with two awards. Granted, they were for two major awards – Best Group Video and Video of the Year – but from a percentage standpoint, a-ha definitely kicked their keister, thanks to the power of “Take on Me” (winning Best New Artist, Best Concept Video, Most Experimental Video, Best Direction, Best Special Effects and the coveted Viewer's Choice) and, to a decidedly lesser extent, “The Sun Always Shines on TV” (winner of Best Editing and Best Cinematography).

The Monkees make the MTV audience believers (1986) – Having become unexpected staples of the network as a result of MTV’s “Pleasant Valley Sunday,” during which viewers were treated to a marathon of the complete series run of The Monkees, Micky Dolenz, Davy Jones, and Peter Tork took the stage and strutted their stuff to a new generation by performing one of their biggest hits: “I’m a Believer.”

Peter Gabriel wins nine VMAs for “Sledgehammer” (1987) – As if nine VMAs wasn’t enough, Gabriel also took home a Video Vanguard award, which was presented to him by another artist who’s never been afraid to get experimental, Laurie Anderson.

Steven Tyler joins Run-DMC to perform “Walk This Way” live (1987) – At the time, the cross-genre thing between rock and rap was still enough of a novelty that viewers couldn’t help but grin when the frontman for Aerosmith leapt onstage to croon the chorus between Run-DMC rapping the verses.

Guns N' Roses tear up the joint with “Welcome to the Jungle” (1988) – After a loud, comedy-laden introduction from Sam Kinison, Axl Rose, Slash, and the rest of the GN'R crew ripped the place apart with their signature song, instantly turning a few million viewers into hardcore fans.

The Fat Boys join forces with Chubby Checker (1988) – Remember a few entries ago when we referred to the “novelty” of rock and rap coming together? Well, this is a legitimate novelty record performed live, with the king of The Twist, Chubby Checker, revisiting his iconic single with the rotund trio known as The Fat Boys. It was absolutely ridiculous, of course, and yet it was something that kids and their parents could enjoy together, and God knows you don’t get a lot of that on MTV these days.

Neil Young wins Video of the Year for a video that MTV originally banned (1989) – It shouldn’t surprise anyone that Young didn’t turn up to accept his award for "This Note's for You," since the network wouldn’t even play the thing when it was first released. Still, at least they both canceled their ban and confirmed that it was an amazing piece of work by director Julien Temple.