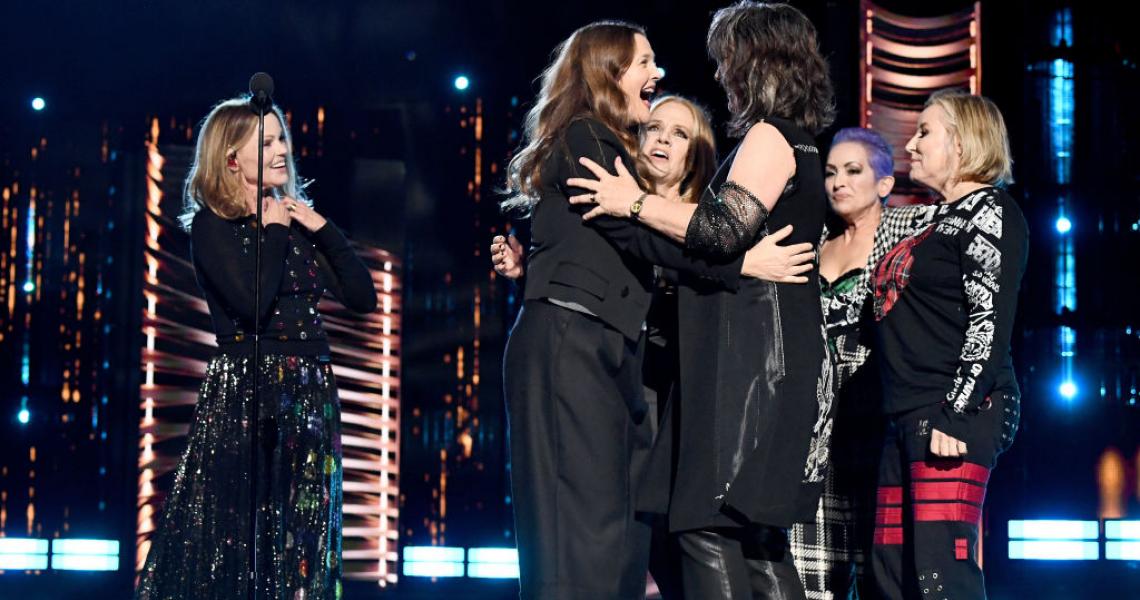 The Rock & Roll Hall of Fame Class of 2021 was inducted in October - live in person at the museum grounds in Cleveland, Ohio after a virtual year in 2020 - and the highlights are now streaming on HBO and HBO Max! If you're looking for the scoop on the legends of the '80s that were honored this year, we've got you covered:

Simply the Best: Tina Turner Enters the Rock Hall As a Soloist

If you’re a longtime Tina Turner fan, you likely already know she’s already in the Rock and Roll Hall of Fame; but if you think she doesn’t deserve a spot in the Hall where her ex-husband Ike’s name isn’t attached to hers, then not only do we have some albums for you to revisit, but we also have a film for you to watch.

To celebrate Turner’s career during the induction ceremony, H.E.R. and Keith Urban teamed up to perform “It’s Only Love,” originally performed by Turner with Bryan Adams, while Mickey Guyton tackled Turner’s signature solo song, “What’s Love Got to Do with It,” but if we’re going to share one clip, then we’re gonna make it Christina Aguilera’s rendition of “River Deep, Mountain High,” which she knocks out of the park.

To induct her into the Hall, Turner chose the woman who portrayed her in the 1993 biopic, What’s Love Got to Do with It, Angela Bassett. Her speech is worth a read:

Imagine: a black girl in Nutbush, Tennessee who embodied more talent than her small town could’ve ever dreamed. Imagine: that same girl breaking through every barrier to one day make history. That woman, that queen... Tina Turner. What a life Tina has led. Her story has become a film, a documentary, a blockbuster Broadway show, and a best-selling autobiography. People still tell me how much Tina has meant to them. I know exactly what they mean, because she has meant that much and more to me. I, too, am one of those people blessed by Tina’s remarkable gift to inspire.

When I played Tina in What’s Love Got to Do with It, I had the terrifying opportunity of trying to figure out how she became the extraordinary woman that we’ve come to know. Fortunately, I had the generous guidance of Tina herself to help me. It was one of the most demanding roles I’ve ever played, but it was also one of the most fulfilling, because just like Tina, I too was a little black girl who had dreams far beyond what the world expected of me. As a black woman, Tina reached deep into her spiritual core with the determination to headline arenas and stadiums just like the great rock bands did. No one who looked like her had ever done it, but she believed that she could. Mick Jagger, David Bowie, Rod Stewart, Bryan Adams... All wanted to duet with Tina, and they did. Soon she was playing to crowds every bit as large as theirs. She broke ground for women and served as a role model for younger artists, just as those rock stars had done for her.

Tina is a brilliat artist who has won nine Grammy awards and sold more than 200 million records. Her voice is instantly recognizable because it comes directly from her soul, and those songs... "We Don’t Need Another Hero," "Private Dancer," "Better Be Good to Me." I didn’t mention one of her greatest songs, one that gave our movie her title. That’s because, as far as Tina’s concerned, love always has everything to do with it. She brings depths of love to everything she does off and on the stage.

Now, let us remember: Tina is already a member of the Rock and Roll Hall of Fame with her earlier work with Ike Turner. However, what brings us here tonight is Tina’s journey to independence. For Tina, hope triumphed over hate. Fate won over fear. And ambition eclipsed adversity. In the words of the late Maya Angelou, "You may shoot me with your words, you may cut me with your eyes, you may kill me with your hatefulness, but still, like air, I’ll rise." And Tina rose.

Tina, welcome on your own to the Rock and Roll Hall of Fame. You’re simply the best.

As you can surely tell from my beaming smile: I am thrilled to now be officially inducted into the @rockhall as a solo artist. What an honor! I am grateful to so many people who stood by me on my journey here – especially you, dear fans. Keep on rocking! 💃🏿 pic.twitter.com/LSD2PE6FBk

They Got the Beat: The Go-Go’s Enter the Rock and Roll Hall of Fame

In the '50s and '60s, there were girl groups, and in the '90s the Spice Girls flashed peace signs and shouted, “Girl power!” In the '80s, however, there were The Go-Go’s, and they weren’t just girls: they were rock ‘n’ rollers, and they didn’t hesitate to prove it at every opportunity. As such, their entry into the Rock and Roll Hall of Fame this year might not have been seen as a given to some, but trust us, there are plenty of people out there who thought that it was long overdue.

It might surprise you that The Go-Go’s opted to have someone not particularly known for her musicianship to induct them, but after watching Drew Barrymore deliver her speech, it’s hard to imagine that anyone could’ve offered a more enthusiastic endorsement of the band, their importance to the culture, and their worthiness in securing a spot in the Rock and Roll Hall of Fame.

All of the members of the Go-Go’s took a moment in front of the microphone to accept their honor, starting with bassist Kathy Valentine, who delivered some of what would prove to be among the most important words of the evening:

Being in a band is a trip. It’s not like anything else—it’s kind of like being married. In our case, a polygamist same-sex marriage that ends up getting divorced and remarried and divorced and remarried. Our band has been, at different times, like the most rinky-dink traveling circus you could ever imagine, like a snarling wolf pack, and very much like family. And that we are a sisterhood and women is significant. We became a commercially successful band, except we started at the bottom where all rock & roll bands start, and we are who we are, because our music found its way into our fans’ hearts.

By recognizing our achievement, the Rock Hall celebrates possibility, the kind of possibility that creates hopeful dreamers. By honoring our historical contribution, the doors to this establishment have opened wider and The Go-Go’s will be advocating for the inclusion of more women. Women who have paved the way for us and others. Women who started bands, who sing and write songs, who excel on their instruments, who make and produce records. Because here is the thing: There would not be less of us if more of us were visible…

Can’t argue with that.