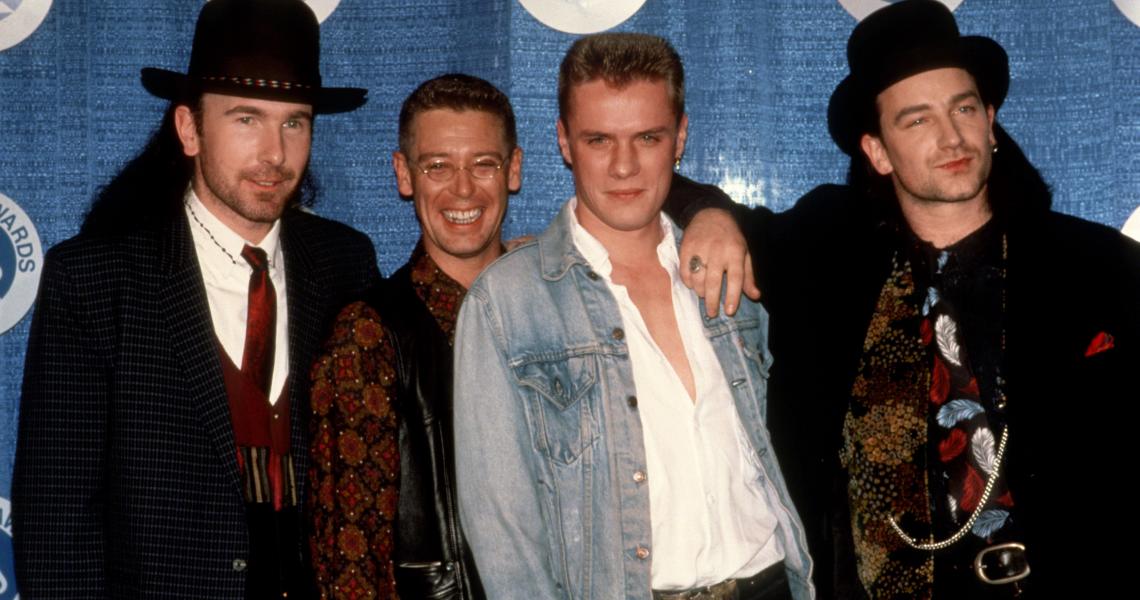 Dateline: Dec. 3, 1988. Ozzy Osbourne, Brendan Fraser and Julianne Moore celebrate birthdays, Illinois celebrates 170 years of being an American state, The Naked Gun is the top movie at the box office, and another 10 classics occupied the upper reaches of the Billboard Hot 100!

We love when our metal acts get acoustic and sensitive, and Poison were no different. Inspired by a sad phone call frontman Bret Michaels made to a girlfriend while on the road, "Rose" was the beating heart of the band's sophomore album Open Up and Say...Ahh! and would become their biggest chart hit, reaching the top of the chart later in the month.

Read More: Christmas 1988: Poison Hits No. 1 in America with "Every Rose Has Its Thorn"

More than a year after George released his debut solo album Faith, it was still spinning off Top 10 hits - six in all, ending with the jazzy "Kissing a Fool." Though it peaked at "only" No. 5 the previous week (every other single reached No. 1 or No. 2), it was more proof of what a formidable album the former Wham! man delivered.

After breakthrough Slippery When Wet launched three Top 10 singles, critics wondered whether Bon Jovi could top themselves. Follow-up album New Jersey proved that they could: the previous week, "Bad Medicine" became their third No. 1 smash, and the album would yield another four Top 10 hits from the same album.

7. Boy Meets Girl, "Waiting for a Star to Fall"

The duo Boy Meets Girl - real-life married couple George Merrill and Shannon Rubicam - were already a chart force behind the scenes, writing "How Will I Know" and "I Wanna Dance with Somebody (Who Loves Me)," both No. 1 hits for Whitney Houston. "Star" was far and away their biggest hit as singers, eventually peaking at No. 5.

6. Anita Baker, "Giving You the Best That I Got"

This smoky, soulful number from Anita Baker lived up to its name: this week, it surpassed the peak position of her biggest hit at the time, 1986's "Sweet Love"; within weeks, it would peak at No. 3, the prelude to two Grammy Awards for the track and a further two nominations, including Record and Song of the Year.

Though the group's album and documentary Rattle and Hum might have bugged people more than U2 meant to bug them, this rollicking single with the Bo Diddley beat was one of U2's biggest hits, ultimately peaking at No. 3 in America.

Back it up! The house-inspired lead single from Duran's Big Thing reached its peak this week. Shep Pettibone's killer single remix made this track even hotter, and the video featured cameos from touring guitarist Warren Cuccurullo (who'd later join the band full-time the following year) and ex-ABC drummer David Palmer. We're guilty of losing some time to Simon, Nick and John's smoldering stares in this clip!

Read More: Christmas 1988: Duran Duran Get Weird with "All She Wants Is"

Though the name of this British sophistipop band might escape you, "How Can I Fall" was Breathe's second U.S. smash hit, after that summer's "Hands to Heaven." Breathe also had a third Top 10 in the States with "Don't Tell Me Lies." All of them are pretty great, and the album they come from, All That Jazz, is something of a lost classic.

Even without longtime singer Peter Cetera, Chicago were still delivering powerful chart hits. More than 20 years in, "Look Away" would soon give the group its third No. 1 hit - and the song, sung by longtime co-lead vocalist Bill Champlin and written by Diane Warren, went on to become the top single of 1989.

1. Will to Power, "Baby I Love Your Way/Freebird Medley"

One of the unlikeliest hits of the year, this dance-pop mash-up of songs by Peter Frampton and Lynyrd Skynyrd was the brainchild of Miami-based producer Bob Rosenberg (the guy with the powerful hair and mustache in the video). Already a presence on Billboard's dance charts, the medley spent a week on top of the Hot 100. Though the group later yielded another Top 10 hit in 1991 - a cover of 10cc's "I'm Not in Love" - this track is easily the group's signature song.