Bon Jovi is back - with a new single, track listing and release date. Who's ready?
Tags
New Album 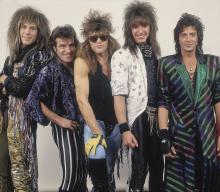