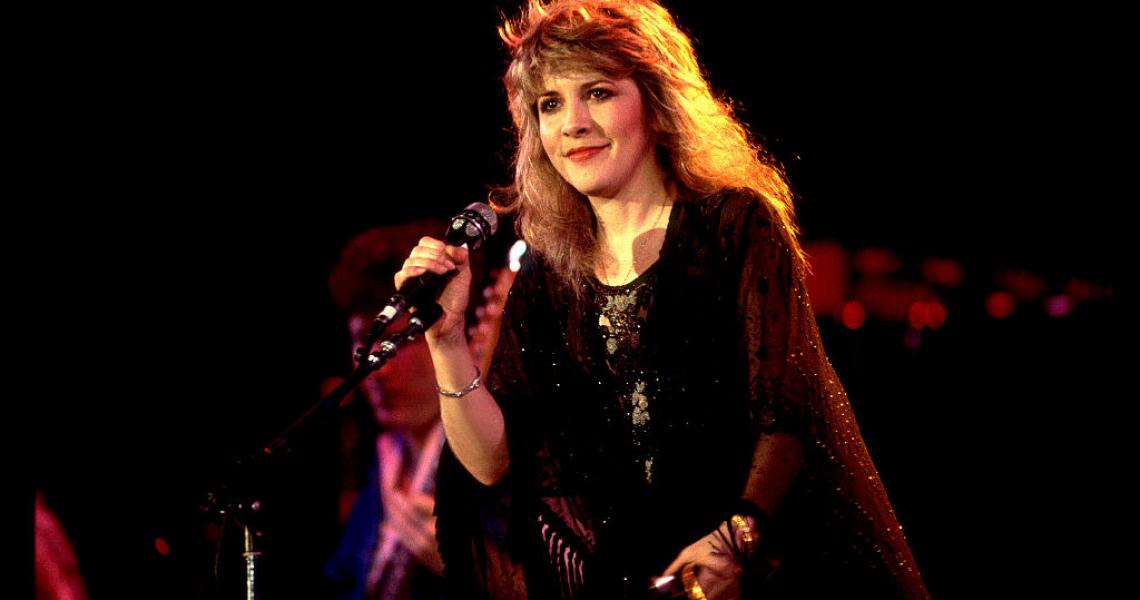 Today we celebrate the birthday of Stephanie Lynn Nicks, though she’s far better known by her nickname, “Stevie.” To commemorate the occasion of this distinctively-voiced songstress, we’ve put together a list of nine of Ms. Nicks’ best solo songs from the '80s, just to remind you that, for as wonderful as she’s always been in Fleetwood Mac, sometimes you just want pure, unbridled Stevie.

“Stop Draggin’ My Heart Around” (1981): Nicks’ debut single from her debut solo album, Bella Donna, was actually the only song on the LP that she didn’t have a hand in writing. Penned by Tom Petty and Mike Campbell, the track wasn’t even intended to be a Stevie Nicks song, but producer Jimmy Iovine, who happened to be twiddling the knobs for both Nicks and Petty, successfully convinced Petty to turn the track into a collaboration, kicking off Nicks’ solo career in a big way and providing her with a No. 3 hit straight out of the gate.

“Leather and Lace” (1981): Nicks’ second solo single was also a duet, this time with Eagles frontman Don Henley, but she’d originally written it as the title track of Waylon Jennings and Jessi Colter’s duets album, Leather and Lace. In the end, the album went forward without actually included the song, but Nicks’ version was her second Top 10 hit, climbing to No. 6.

“Edge of Seventeen” (1981): It took until her third single for Nicks to deliver a song that was 100% Stevie, and while the chart results weren’t quite as substantial as its predecessors, it nonetheless managed to chug its way to No. 11...and, yes, that word choice is intentional, since it’s the perfect way to describe the riff that powers the tune.

“Stand Back” (1983): The debut single from Nicks’ sophomore solo LP, The Wild Heart, may well be the most instantly recognizable Stevie song of all time, having made its debut before the release of the album when she performed it at the 1983 US Festival and maintained a constant spot within her live sets ever since. More importantly, however, it also landed her in the top 5 for the first time on her own. (Bonus trivia: the song was inspired by Prince's "Little Red Corvette," and the iconic rocker provided the song's iconic synthesizer riff.)

“If Anyone Falls” (1983): The second single from The Wild Heart, this tune earned Nicks a tremendous amount of airplay on MTV, and it also led to another big hit, climbing to No. 14 on the Billboard Hot 100.

“Talk to Me” (1985): While this was another single that wasn’t penned by Nicks herself, it was once again a track that found its way to her through producer Jimmy Iovine. Written by Chas Sandford, co-writer of John Waite’s “Missing You,” it was the first single from Nicks’ third solo album, Rock a Little, and it was another big hit for her, climbing to No. 4 on the Hot 100 and topping Billboard's mainstream rock chart.

“I Can’t Wait” (1985): Not that there’s anything wrong with sounding a little dated, but when revisiting Nicks’ solo singles, this is absolutely the one that most screams, “I was born in the ‘80s!” Alas, the ‘80s weren’t nearly as excited about it as they had been the preceding single, but it still became a Top 20 hit, making it to No. 16.

“Has Anyone Ever Written Anything for You” (1985): It wasn’t a big hit at the time of its release, peaking only at No. 60 before beginning its descent, but in addition to finding fans through its inclusion on Nicks’ best-of compilation, Timespace, it also got a lot of love as a result of Stevie singing it on American Horror Story: Coven. Yes, really. If you haven’t seen her appearance on the show, look no further.

“Rooms on Fire” (1989): The lead single from Nicks’ fourth solo album, The Other Side of the Mirror, this actually remains Stevie’s biggest solo hit in the U.K., hitting No. 16. As it happens, that’s also where it landed on the Hot 100. Ah, the serendipity...