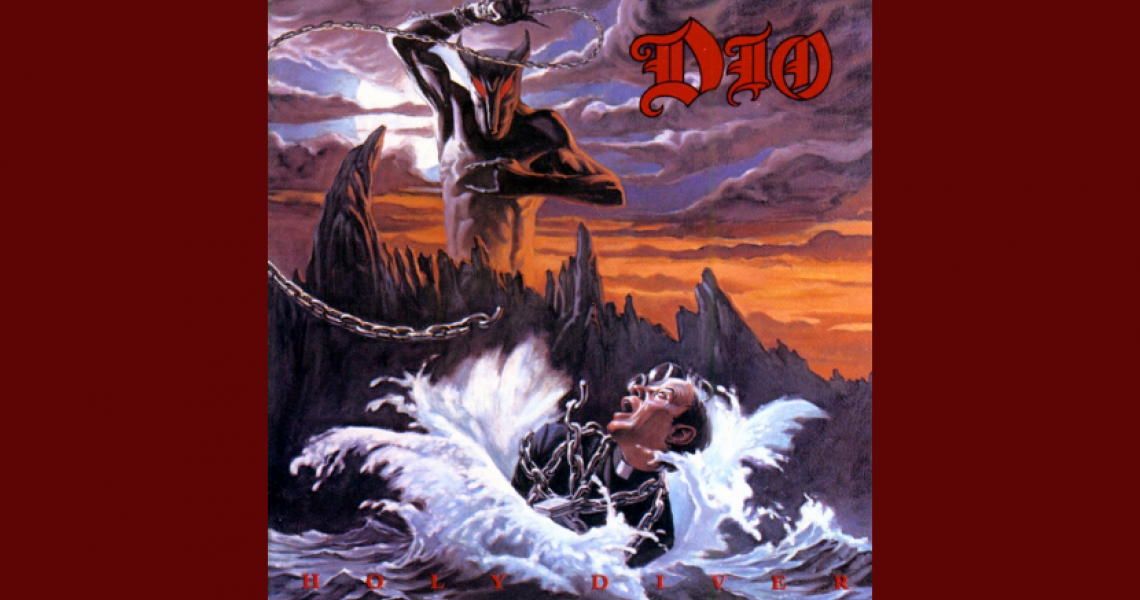 Ronnie James Dio was a hot commodity in the early 1980s. The former frontman of Ritchie Blackmore's Rainbow had done the seemingly impossible: saved a floundering Black Sabbath that was still looking for direction after Ozzy Osbourne was tossed out of the band. After fronting the group for two successful studio albums—Heaven and Hell and Mob Rules—and one live album, Live Evil, Dio struck out on his own.

On May 25, 1983, the newly christened group Dio released the band's debut album, Holy Diver. A breakout success, the album was certified gold in 1984. The album was certified platinum five years later that in 1989. Peaking at No. 56 on the Billboard album charts, the legacy of Holy Diver looms much larger than sales numbers and chart rankings. It's a heavy metal classic that continues to help define and inspire the genre all these years later. Let's crank it up to 11 and rock out to these five fun facts about Dio's Holy Diver.

1. Ronnie James Dio poached Drummer Vinny Appice when he left Black Sabbath
During Dio's first stint singing with Black Sabbath, Vinny Appice was drumming for the group. When Dio left Sabbath to go solo, Appice went with him: “Ronnie had a solo deal while he was in Black Sabbath," Appice explained. "His first plan was to stay with Black Sabbath and do a solo record with all his friends on it. Then things soured up with Sabbath. Things got a little bit funky, and he decided, that’s it, he’s leaving. Then it became, he’s going to use that record deal to launch a new career. That’s when he asked me if I wanted to join, and I said yes.”

2. First single "Holy Diver" is about an alien Christ
The album's title track is not about Satan. Quite the opposite, actually. Here's how he explained it in the film Metal: A Headbanger's Journey. "So, the same thing happened on this other far-distant planet, and all the people on this planet are calling him the Holy Diver because he's about to go to another world to do what he did to the first: absolve them from their sins by having himself killed. And the people are saying to him, 'Don't go,' with innuendos of tigers and stripes and hearts and being eaten. It was meant to show just how selfish humanity is, that this one form of humanity on this one world said, 'No, don't go down there and save anybody else. Stay here, we need you, you are ours.'"

3. The Holy Diver album cover was the debut of "Murray"
That big, scary-looking demon featured on the cover of Holy Diver has a name: Murray. The Dio band's mascot, who's formally known as "Murrallsee,” is the world of artist Randy Berrett. Berrett would go on to illustrate Murray on a number of the band's album covers.

4. Ronnie James Dio hated "Rainbow in the Dark" so much that he almost destroyed the master tapes
Fresh from his first stint in Black Sabbath, the singer wasn't the biggest fan of the second single from Holy Diver, the pop-leaning "Rainbow in the Dark." The song went on to become a huge and enduring hit, and one that Dio himself grew to love. He explains it in the video below.

5. Fans used to sing "Holy Diver" to Dio when they met him in person
"For some reason, that album and the song really hit a chord with people," the singer told NME in 2009. "Killswitch Engage did a version of it and I saw them do it at a festival recently where the reaction to their version was wonderful. But it’s not something that gets resurrected every once in a while, it’s just always there. I guess it’s because good songs always work. What usually happens when people in bands meet me for the first time and they’re fans is that they’ll sing (adopts a self-mocking high pitched voice) 'Hoooly Diiiiiver' at me! It happens all the time and it’s very touching."