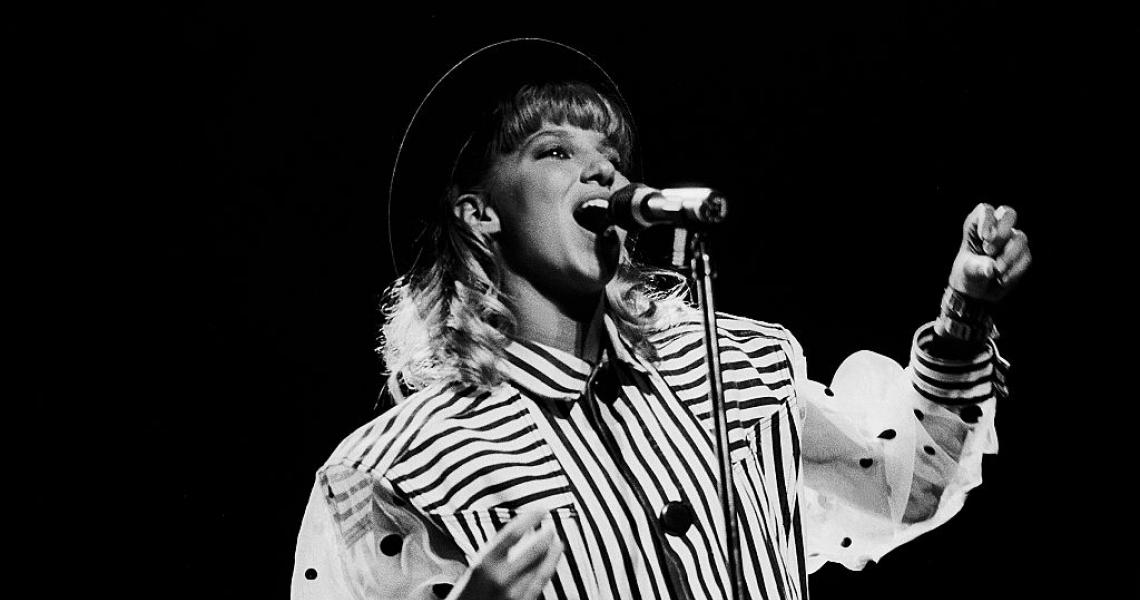 This week on the Rhino Podcast, 80's sensation Debbie Gibson chats with executive producer John Hughes and host Dennis "the Menace" Scheyer to reflect on her storied career, from performing to crowds in the clubs while still in her teens, dealing with her fame while still in school and starring on Broadway.

ON HER CHILDHOOD MEMORIES:

GIBSON: "So my daddy, Joe Gibson, was put in the foster care system and spent his entire childhood in a boys home with a hundred other boys. It was really a Catholic boys home. In fact, two different couples wanted to adopt him, and at the time they didn't let them adopt him because they were Protestant and I think Methodist, because they weren't Catholic..."

HUGHES: "It was better for him to remain in an orphanage?!"

GIBSON: "Kind of crazy, but that, those were the times. And so he found music or music found him in this home. And one of the brothers, Brother Frank Springman, and by the way, I remember him so vividly because he was my friend. He was my pen pal. I remember at eight years old, writing him letters or him coming to visit."

"He gave me this amplifier and a microphone and these things from the home that he was eventually replacing and giving away. And so, he was kind of like a grandfather figure to me. So he took my dad and three of the boys under his wing and started them singing barbershop and they were on Name That Tune, and Joe Franklin and I eventually won a spot on the Joe Franklin show in a talent contest."

ON HER EXPERIENCES AT SCHOOL:

GIBSON: "Oh, I was an outcast for sure. I mean like eventually when I ran music camps and workshops, I just related to those kids so much because I'm like, listen, I was that freak in school cause that's the, they always use that word. You know, I'm such a freak and it's different now because I think more kids are doing music."

"... It can be kind of brutal for kids that are creative in school. I felt very misunderstood because people mistook the arts for like just a hobby. Like they think, 'Oh, what are you really going to do in life?'" And they didn't realize the dedication level that I had and they didn't realize like, no, I'm keeping up with what you guys are doing. Plus I have this whole other life and this whole other vocation and focus and. So at a very young age, I was singing at the metropolitan opera in the children's chorus...

ON GETTING SIGNED TO ATLANTIC AND THE INITIAL FIRST STEPS:

GIBSON: "Oh my God. If the first strategy was like, who will listen? Who will buy, who will buy?"

"You know, I don't think, initially my strategy was going the club route, but "Only In My Dreams" felt like the first single. At the time, it felt like a club record and Little Louie Vega did one of my favorite remixes of all time. And to this date, like I just worked with Tracy Young, and I kept encouraging - I mean, she's brilliant -  but I kept referencing that mix because I said, you know, 'I just feel like you have a chance to kind of rewrite my song.'"

"I feel like remixes are such an opportunity to create some other musical structure for the song. And Little Louie did that with "Only In My Dreams" and, and basically my mom and I just kept following the breadcrumb trail. We were just like 'Huh...' The music always led the way, and I say that to this date of my career, the music will lead the way. I create it, and then, ideas all branch out from there.

I wouldn't be on the Hallmark channel if I didn't have a music career. I wasn't the best actress to ever walk the face of the earth. So everything stems from the music. And with that, then it was, 'Okay. It's a dance record. Where do people go? Dance and clubs? Well, let's get me a club booking agent.' We didn't know what we were doing. And I say we, but really, my mom figured it out as we went."

ON PERFORMING AT CLUBS AT SUCH A YOUNG AGE:

GIBSON: "I would play a teen club, a straight club, and a gay club all in the same night, and I would change costumes in the car and my mom would go in ahead of me and my two gay backup dancers and my sister Karen, who's now the one who's managing kids and everything. She would do sound and light. The reel to reel backing tracks."

"I was underage. Nobody even knew, nobody cared about my age and I think, I swear I looked older than, than I do now, cause I just, we made it a point to hide my age. I love that. And I just went in the back door. We joke it was like the Von Trapp family. I played crazy clubs in East LA where we were walked in with armed men and there were metal detectors, and my jewelry would get stolen off my fingers. As I reached into the crowd, I learned quickly not to wear rings to club gigs."

"The gay club was always my favorite thing. The teen club, you know, the teens were a little too cool for school. The straight club too, like, you know, 'Oh, we're picking people up. Who is this chick singer?'  At the gay club, people wanted to celebrate the music. I remember playing a lesbian club in Brooklyn at 16 and a bunch of sweaty women coming and literally embracing me. And I just feel like that's the open diverse world I literally grew up in and I'm so grateful for that."