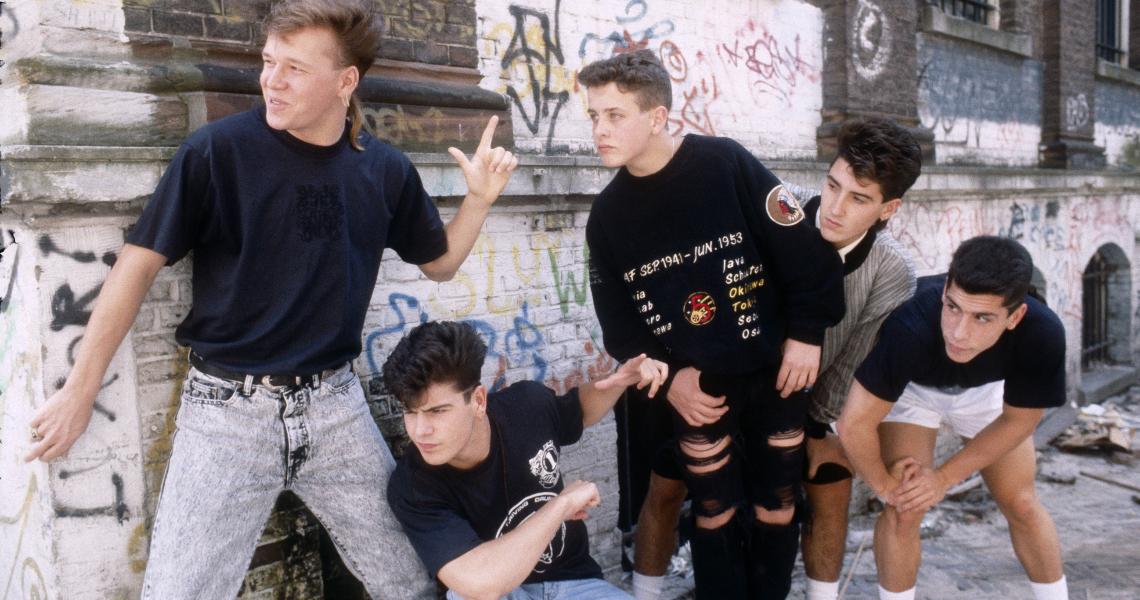 Dateline: Nov. 11, 1989. Demi Moore and Leonardo DiCaprio celebrate their birthdays, the Berlin Wall has just fallen, and the Top 10 of the Billboard Hot 100 is full of non-stop hits! Let's take a look back at the list.

Several of the albums represented on this particular chart were known for spinning off hit after hit. Bobby Brown's Don't Be Cruel was no different: the downtempo "Rock Wit'cha" was the sixth Top 10 from the album, having recently peaked at No. 7.

Just how popular were NKOTB in '89? The band's breakthrough Hangin' Tough spun off five Top 10 hits (including one you'll see later on this chart), but it wasn't enough. So "Didn't I (Blow Your Mind)," a cover of the Delfonics hit from almost 20 years before and recorded for the band's first album, was re-released, where it would peak at No. 8.

8. Tears for Fears, "Sowing the Seeds of Love"

The British duo released their first new album in four years with 1989's The Seeds of Love. "Sowing the Seeds" recalled the best of The Beatles' psychedelic period and had recently peaked at No. 2 on the charts.

"Sowing the Seeds of Love" was kept from the top spot by this, the lead single from Janet Jackson's Rhythm Nation 1814. It was making its way down the Top 10, but the album would spin off an unprecedented six more Top 5 hits over the next two years.

Athens, Georgia's top party band were finally entering the mainstream after more than a decade together; "Love Shack" would eventually peak at No. 3 - the band's first Top 10 hit. You betta werk (at least a little) to catch a glimpse of a pre-fame RuPaul in the video!

Forever Your Girl, the debut album from the former dancer and future American Idol judge took more than a year to catch on with audiences, but when it did, there was no stopping it. "(It's Just) The Way That You Love Me" was on its way to No. 3, following three straight chart-toppers from the album ("Straight Up," "Forever Your Girl," "Cold Hearted") with another ("Opposites Attract") to come in a few months.

4. Milli Vanilli, "Blame It on the Rain"

"Blame It on the Rain" thundered its way up the charts, the third Top 10 hit from the hunky duo. Of course, we all know how that turned out.

Ripped jeans! Screaming girls! Fancy dance moves! This New Kids video had it all - the fifth Top 10 hit from Hangin' Tough, recently peaked at No. 2 after the last two, "I'll Be Loving You (Forever)" and the title track each reached No. 1.

2. Roxette, "Listen to Your Heart"

Living up to the title of their international breakthrough Look Sharp!, this Swedish duo's second chart-topper made way for a new No. 1 hit after a week at peak.

November 1989 was truly power ballad season! This supergroup, featuring John Waite on vocals as well as Journey guitarist and keyboardist Neal Schon and Jonathan Cain, would retain the top spot for two weeks - eventually ceding to another Diane Warren-penned ballad: Milli Vanilli's "Blame It on the Rain."