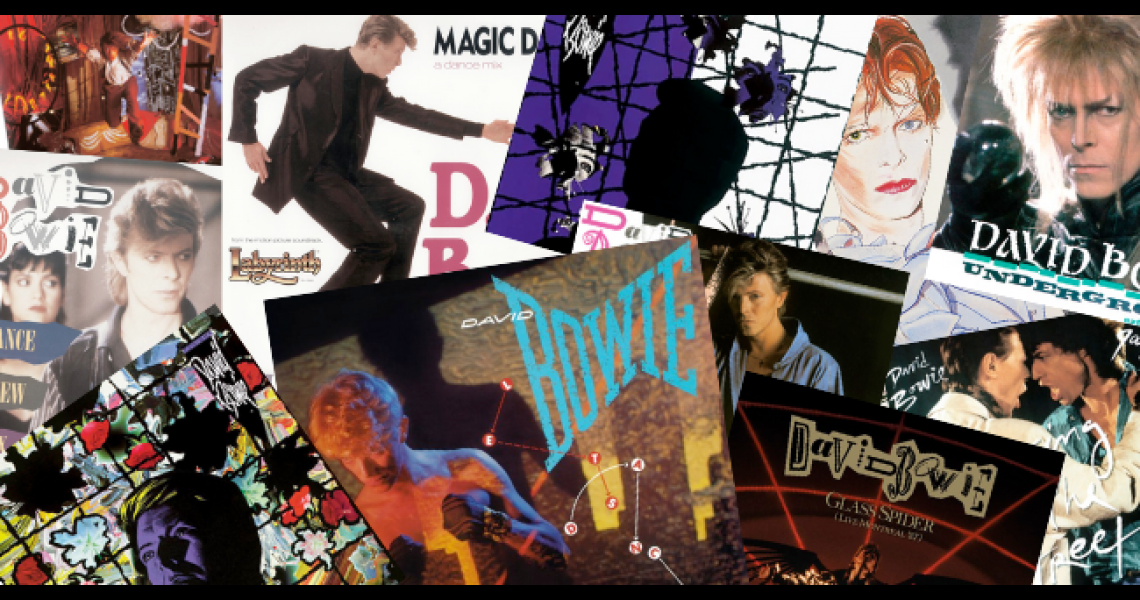 David Bowie spent most of the '60s as an artist in search of an audience, and the '70s as an artist whose dazzling styles and changing whims led to recognition from multiple audiences. The '80s would take him to places nobody would have suspected. Join us for a closer look at his defining musical moments of his third decade as a singer.

Scary Monsters (and Super Creeps) (1980): Bowie's artistic vision on the well-received "Berlin trilogy" of the late '70s did not translate commercially, and he found himself dismayed that artists like Gary Numan, who clearly took inspiration from his sound, were outperforming him. So Scary Monsters found him turning in a much more focused, commercial direction - though not without his own usual quirks. Reuniting with old friend Tony Visconti as co-producer and a host of guest artists that included The Who's Pete Townshend, guitarist Robert Fripp and Bruce Springsteen's pianist Roy Bittan, the album featured classics like the "Space Oddity" sequel "Ashes to Ashes" and the strutting New Wave tune "Fashion." An "Ashes to Ashes" video was the most expensive ever shot at the time, featuring Bowie in a Pierot costume and anticipating the high-concept visions of his rest of the decade.

Queen + David Bowie, "Under Pressure" (1981): Reeling from the death of his friend John Lennon at the end of 1980 and frustrated with his label, RCA Records, Bowie was looking to start fresh. A chance encounter with the members of Queen at a studio in Montreux, Switzerland, led to this unforgettable single, propelled by that bass-and-piano hook and featuring two of England's greatest rock and roll voices in their first and only collaboration. It stalled on the U.S. charts, but sales aren't everything - "Under Pressure" is rightly considered a classic today.

READ MORE: The "Pressure" Behind Queen and David Bowie's Team-Up

Let's Dance (1983): Nile Rodgers, the CHIC guitarist whom Bowie approached to record his first album for EMI, remembered being shocked when the singer pulled out a 12-string guitar and sprung into a folk tune he called "Let's Dance" - but the duo worked hard to make the recordings live up to the name, recruiting an upstart blues guitarist named Stevie Ray Vaughan to help them out. The results were unbelievable: the title track to Let's Dance gave Bowie his first single to top the charts in the U.S. and the U.K., and singles "China Girl" and "Modern Love" followed them into the Top 10. David Bowie was now a pop star.

Tonight (1984): A quickly-recorded follow-up to Let's Dance that featured few of its players and almost none of the grade-A material of its predecessor, even Bowie didn't have much to say about the album. "I really should have not done it quite so studio-ly," he later confessed to Q. "I think some of it was a waste of really good songs." Still, "Blue Jean" is not without its charms, and there's one real gem buried alongside the Iggy Pop and Beach Boys covers: the majestic "Loving the Alien."

The soundtrack years (1985-1986): the critical failure of Tonight didn't knock Bowie off his commercial axis in America. Quite the opposite: a string of one-offs like "This is Not America" (a collaboration with The Pat Metheny Group), songs for his starring roles in the Jim Henson fantasy Labyrinth and the British musical Absolute Beginners, and even an over-the-top cover of "Dancing in the Street" with Mick Jagger were all big hits. (Years later, that "Dancing" video is still kind of a riot.)

Never Let Me Down (1987): Bowie's last album of the '80s was meant to unite all of his ideas as an artist and hitmaker - his love for eclectic styles and his penchant for chart success. Amazingly - thanks to muddled production that he lamented later in life (and was stripped off after his passing) - it succeeded at neither. The 2018 remix/revisit revealed the quality of songs like "Time Will Crawl" and "New York's in Love," but we have a soft spot for the rare single mix of the title track, which sounds like an '80s take on "Young Americans."

Sound + Vision (1989): Worn out from the grandiose (and similarly ill-received) Glass Spider tour, Bowie retreated from solo stardom for a spell, forming a band called Tin Machine and reassessing his muse. But he also spent time getting his catalogue in order; having gained control of his 1969-1980 work from RCA, he worked with an upstart CD label, Rykodisc, to assemble a triple-album journey through his work, with plenty of rare tracks to satiate fans. Sound + Vision helped further legitimize the box set craze and won a Grammy Award for its brilliant packaging.