The "Pressure" Behind Queen and David Bowie's Team-Up 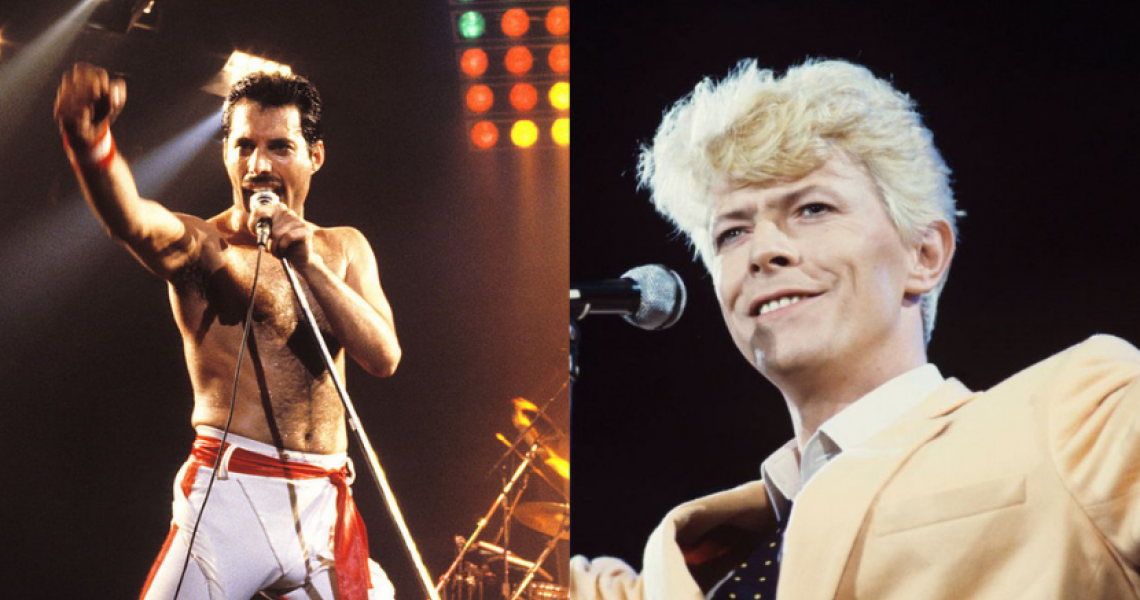 A bass riff. Some finger snaps. A bright pair of piano chords. And two of the most singularly recognizable and talented voices of the '80s. Queen and David Bowie's "Under Pressure" is one of the defining songs not only of the decade, but perhaps of all classic rock that came after it.

Of course, no one could have predicted this when both British acts found themselves in the same Swiss studio in 1981 and decided to collaborate. Both Queen and Bowie had spent the '70s building solid catalogues of theatrical rock and roll, and would spend parts of the next decade chipping away at their images. In 1980, Queen's The Game was their first to break their semi-official band rule of not using synthesizers; as for Bowie, he was a few years away from reinventing himself as an MTV darling on Let's Dance

After the five of them found each other at Mountain Studios in Montreux - Queen working on a dance-oriented album to be titled Hot Space, Bowie wrapping up a theme song for a horror film called Cat People - they started thinking about working on a track together. Bowie contributed some vocals to a song of theirs called "Cool Cat," but was unhappy with the results - so the group started improvising together, dusting off a song drummer Roger Taylor had brought to the group called "Feel Like."

Queen guitarist Brian May later suggested that frontman Freddie Mercury found it hard to collaborate with another strong-willed songwriter like Bowie. ""It was hard, because you had four very precocious boys and David, who was precocious enough for all of us," he told Mojo in 2008. Nonetheless, each of them brought their best to the session, with Bowie reminding bassist John Deacon of a riff he'd played during their jam session, which ended up kicking off the song.

READ MORE: Six Facts About Queen's "Another One Bites the Dust"

While it bizarrely never got higher than No. 29 on the Billboard Hot 100 in America - outcharted by Hot Space's follow-up single "Body Language," which just missed the Top 10 - "Under Pressure" was hailed around the world as a high watermark for both acts - a simple but catchy anthem supporting unity in the face of unrest around the world. In the U.K., it topped the singles chart for two weeks in November 1981 - Queen's second No. 1 hit and Bowie's third - and another dozen countries would welcome it into the Top 10. (Its popularity carried over to the backbeat of Vanilla Ice's 1990 No. 1 hit "Ice Ice Baby," the first hip-hop song to top the charts in America. Ice infamously, confusingly denied sampling the track at the time.)

For all the song's success, Queen and Bowie would never perform the song together in concert. It was a fixture of the band's sets for years afterward, but Bowie didn't perform it on stage until he joined Annie Lennox at Wembley Stadium in 1992, as part of a star-studded tribute in honor of Mercury, who'd died of AIDS the year before. Afterward, it became a fixture of Bowie's live shows.