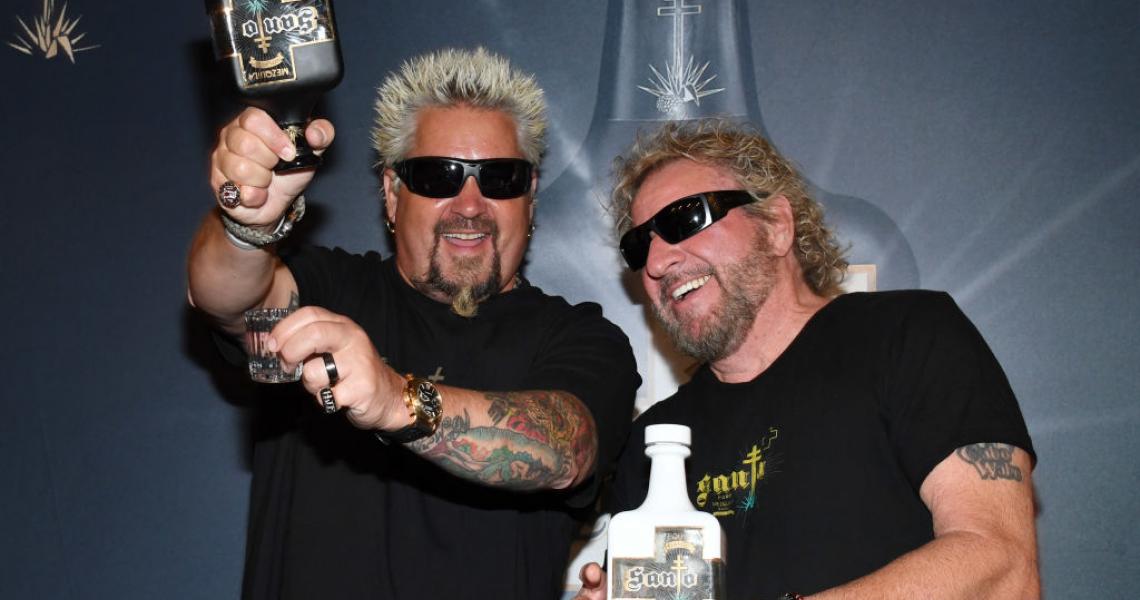 The Red Rocker and the Mayor of Flavortown want to do a shot with you and yours for the holidays. Sammy Hagar and Food Network star Guy Fieri have teamed up to launch a new tequila brand, Santo Tequila Blanco.

"I think there's an energy that we both have that we see and respect in each other. We've both got really strong work ethics and are constantly grinding to take full advantage of all the opportunities we are afforded. That's a big thing," Fieri told Billboard about the connection with the former Van Halen frontman. "Throw in the love of friends, family, food and tequila, you've got a pretty cool friendship. But with all that said, I had no choice but to click with him because everybody always thinks I'm him anyway."

Hagar has been in the food industry for years now, going back to the original Cabo Wabo Cantina in Cabo San Lucas, Mexico, launched in 1990. In 2011, he introduced Sammy's Beach Bar Rum.

"Yeah, I don't want to say I was first but I think I was," Hagar laughed. "I think I was before Jimmy Buffett; he came a second behind me with his Margaritaville Tequila but I was in two or three years in already at that point. Jimmy's a genius and I consider him the godfather of creating a lifestyle brand: living the life and making a business out of it. He was the first to really do that."

Hagar went on to explain how making it in the world of spirits is a lot like like the glory days of rock and roll: "In the old days with a record you'd have to appeal to the DJs. When you'd put out a new single, you'd have all promotion people around the country and go down to the local radio station and smoke a joint or do a line of coke and they'd get the DJ to play the record even if it was at midnight. If the DJ liked it, you got spins. Well, it's the same thing with bartenders, if the bartenders like your brand. You have to make a great record if you want a hit, the same way that you have to make a great product."