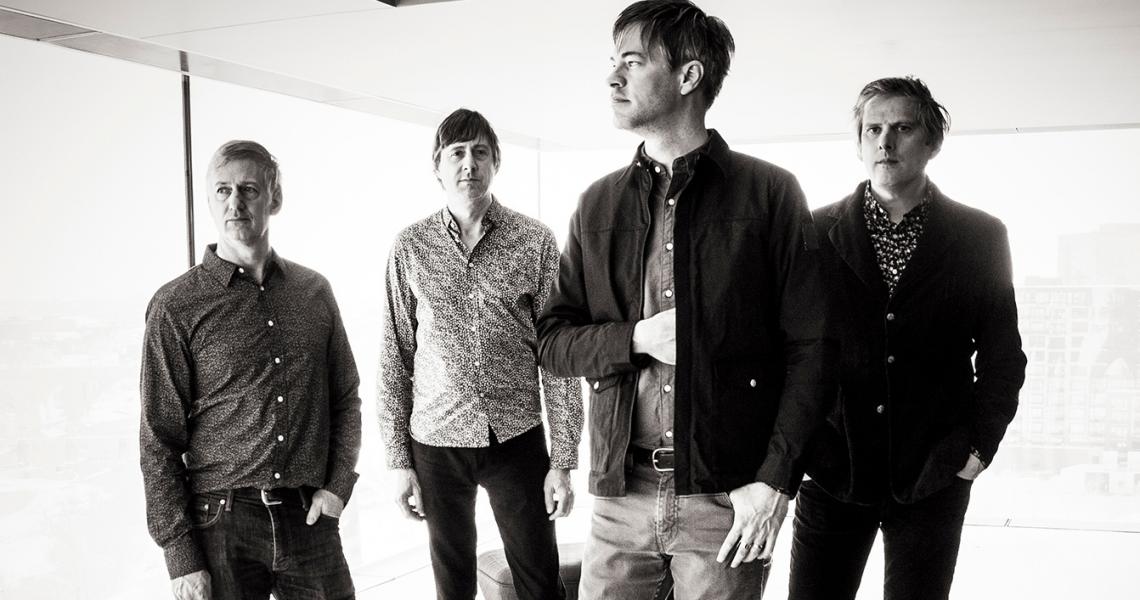 Back in 1986, a group of teens from Hershey, Pa., formed the band, Ocean Blue, and the young indie-pop collective quickly signed to the legendary label Sire Records.

ON THE BAND'S INTEREST IN SIRE RECORDS FROM THE BEGINNING:

Schelzel: "It was the absolute coolest label in the 80's for America. Seymour [Stein] was signing super interesting bands, bands from England that we loved, but American bands, people who were making great records, and you know, we're being played on college radio, you know, the new wave punk rock stuff of the day.

"And so, you know, when I looked at my Collection of music. - half of it, easy, was from Sire Records."

ON AUDITIONING FOR CLIVE DAVIS WHILE SEARCHING FOR A RECORD DEAL:

"They set up a private showcase for us, for Clive Davis in New York. Rented out a rehearsal studio space. I remember KISS was rehearsing next door. We got to meet Gene Simmons as he was on the payphone."

"We set up in this very dark, small rehearsal space and sat around for about a half hour waiting for Clive Davis to just kind of show up and he arrives by limo, completely silent. He walks into the room, sits down and looks at us with the expectation. We're just standing up there, s we play, we play a song, and in the first chord, my string breaks and I'm so nervous, I don't know what to do."

"And so he muddled through that song nervously. And you know, it's Clive Davis sitting like, where you are from me? He's like right there.

Schelzel: "Yeah, I was probably 18...I don't remember if this is true, but it felt like he was wearing sunglasses. He wasn't like, 'Hey guys, how's it going?' He was just silence and sat down...and we played. We played two songs, "Myron" off our first record and we played "Between Something and Nothing," and finished."

"He got up. He sort of nodded his head and he left and that was it."

ON THE OCEAN BLUE'S RELATIONSHIP WITH SOUTH AMERICA WHILE ON TOUR:

Schelzel: "The extraordinary thing is, we would get these offers from time to time to play different parts of the world, you know, Europe or Japan or Australia or something."

"And then these offers started coming in from South America and in Peru in particular. And Peter, our drummer, was like, you know, fly, I'd really like to go to Machu Picchu. That'd be really cool."

"So we go down there and discover, particularly the first time we were there, it was like we were the Beatles. It was just insane. So we ended up playing for people in Lima, that were probably three times as enthusiastic as the crowd we saw in Los Angeles."

And of course, those guys were super enthusiastic. I mean, storming the van as we're coming into the venue. And playing a show and they know every word, every word. After the show I had people...handing me things to sign. And I'm seeing all these little bootleg cassettes and CD's of our records, and you know, I'm realizing, wow, we have a legit following here."

ON MAKING THEIR NEW ALBUM, KINGS AND QUEENS / KNAVES AND THIEVES:

Schelzel: "The new record and the record we did before it, Ultramarine, are our records we've done entirely on our own. We didn't work with producers / outside producers or engineers or studios for that matter."

"These are records we've done in my home studio. Peter's home studio, Ed's home studio. I write a song and I work it up in my studio and start sharing it with the guys and we put the record together that way. The, the advantages is I can work on it whenever I want and rework it until it's really there."

"The disadvantages? It takes a long time to make a record that way because we're not sequestering ourselves away for weeks or months to do it and get it done. We're working on it bits at a time."

ON SCHELZEL'S SURPRISING SECOND JOB AS AN INTELLECTUAL PROPERTY LAWYER:

Schelzel: "I am, which is an awesome thing for an artist to be, is it not? I mean, I learned a lot about the law and about intellectual property in particular being from being an artist. So, you know, from the time we signed our first deal with Warner Brothers, you know, figuring out what the contract means, figuring out the whole concept of copyright and trademark, just really fascinated me. Like this ownership you have in the intangible. And for me, it's always been like more of an organic connection to a song as a writer."

Hughes: "Are people scared when they find out what you do?

ON WHETHER SCHELZEL IMAGINED HE WOULD STILL BE TOURING 31 YEARS LATER:

Schelzel: "No, no, no. I thought that I would quit when I was 30. That I wouldn't do this anymore, but I don't know... when you love music and you make music, it's a part of you. And I realized that just doesn't go away. And as long as I'm not making a complete fool of myself."