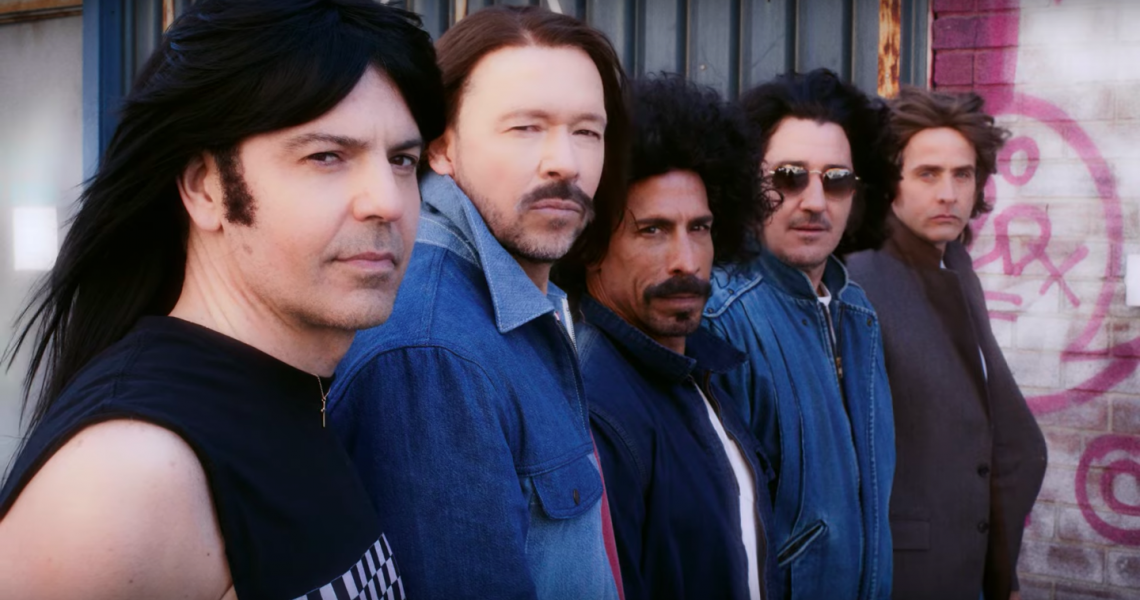 New Kids on the Block are not afraid to say they were forged in the '80s. Since 2019, their Mixtape Tours have united them in arenas with other hitmakers from the same decade, including Tiffany, Debbie Gibson and Naughty by Nature; on their latest dates, kicking off through the spring and summer of 2022, they'll team up with Rick Astley, Salt-N-Pepa and '90s R&B stars En Vogue.

To celebrate the tour, the guys and their tour mates have just dropped a new single, the electro-pop "Bring Back the Time," and if you're an '80s junkie, we bet you're writing down all the bands NKOTB and company reference in the hilarious music video. But put down that pen! We've not only checked off all the references, but we're sharing the videos with you - all the better to create your own video dance party at home!

After an intro from Video Music Box co-creator and host Ralph McDaniels, the group dons long-haired wigs and denim, posing and playing instruments outside a warehouse just like in Journey's video to "Separate Ways (Worlds Apart)."

As the first verse progresses, NKOTB don the distinctive red "energy domes" and black turtlenecks that Devo wore in their video to "Whip It."

READ MORE: August 1980: Devo Stirs the Nation with "Whip It"

The '80s awesomeness kicks up a notch when Donnie Wahlberg dons the distinctive hairstyle of A Flock of Seagulls' Mike Score, immortalized in their video to "I Ran (So Far Away)."

The pre-chorus raises the stakes with Rickroll king Rick Astley channeling David Byrne in the clip for "Once in a Lifetime" - maybe the wildest thing you'll see all week.

And when the guys kick into the chorus, they're dressed exactly like '80s metal gods Twisted Sister! Throughout the chorus, you'll also see glimpses of Joey McIntyre as Robert Palmer in the "Addicted to Love" video and Jordan Knight as Billy Idol.

Salt-N-Pepa rap the second verse, appearing in the same black-and-white high-gloss style as in Madonna's "Vogue" video (a '90s clip, sure - but by another '80s icon, so who's complaining?)

READ MORE: When Madonna Reclaimed No. 1 with "Vogue"

When the guys come back in for the second pre-chorus, they're decked out in the bright-colored suits Duran Duran wore in their immortal "Rio" video. Sure, they're on a raft in front of a green screen and not on the bow of a yacht, but we're having too much fun to care.

En Vogue join in on the bridge, calling back Toni Basil's cheerleader aesthetic from the "Mickey" music video; Donnie also pops up again as Max Headroom!

And for the last chorus, there's one last throwback: Jordan and Jonathan Knight tie their hands together just like in Michael Jackson's "Beat It" short film - only they're not fighting with switchblades, but retractable combs!

All in all, it's the right mix of nostalgia (and a catchy tune) that'll make you smile, just as the boys from Boston have been doing for more than 30 years.