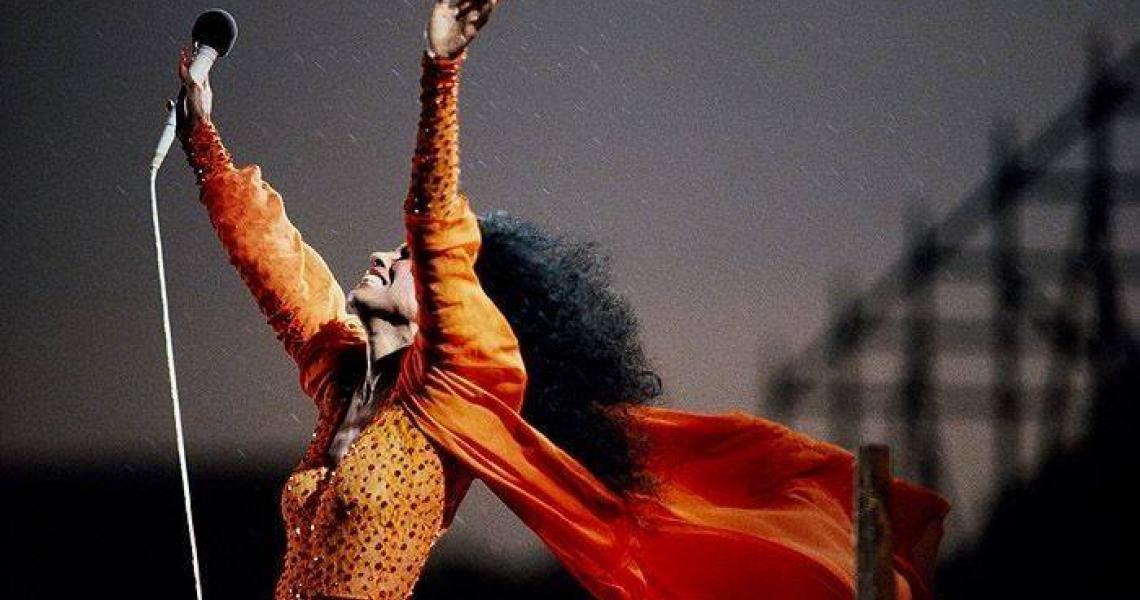 It stands as one of the most epic concert performances in American history. Motown legend Diana Ross had embarked on an ambitious plan: a free concert in New York City's fabled Central Park. The was staged as a global event, beamed live around the world on the then-emerging cable network, Showtime. It was a benefit show, with all proceeds from merch sales set to fund a new children's play area in Central Park, Diana Ross Park.

Everything was going according to plan--except for the weather. After an explosive opening number featuring New York's Bernice Johnson Dancers performing a West African-inspired dance in grass skirts and Miss Ross resplendent in a rainbow-colored fringed Issey Miyake coat, ominous storm clouds darkened the park. With nearly a half-million people in attendance, the skies erupted with a torrential downpour. The rain was relentless as the crowd grew restless and rushed towards the stage. Violence began to break out as the police moved in to control the crowd. With Diana Ross onstage pleading with the audience for calm, the show was shut down after just 45 minutes. The storms had even destroyed the merch stands, so there was no money for the park. As she left the stage, the singer suggested that they might try to do it all over again the following night. There were rashes of muggings as soaked concertgoers made their way home.

“We were all like, 'Really?' She had decided this for herself,” remembered Dick Clark’s New Year’s Rockin’ Eve director, Dennis Rosenblatt, to Out. “I think the fact that she announced it probably put a little more pressure on the city’s departments to go along with her desire. If you know anything about her, you know she’s a very strong and determined woman. She wasn’t about to see her dream partially squelched because of rain.”

On July 22, 1983, the New York Parks department did indeed give Ross and company the green-light to try it again. Another massive crowd assembled in the park, and this time the singer was able to deliver her full show. Ranging from her own classic hits to covers of Michael Sembello's "Maniac" and Michael Jackson's "Beat It," it was Diana Ross giving her fans everything and then some.

The legendary moment was turned into a theatrical film, Diana Ross Live in Central Park, which was officially released last March.

"It took an army to put it together. After the first day, even though she said she was doing it again, my crew said the equipment was all shorted out," recalled Steve Binder, who served as directed the original 1983 TV special, to Billboard. "The Great Lawn was like a Great Lake and our equipment -- including all of the cables -- were buried under water. The crew spent all night trying to dry it out with fans and hair blowers and so forth just so the equipment would work the next day. We were panicked. As a matter of fact, the audio did have a buzz in it when I went into post-production, and thank God technically they were able to get the buzz out of the soundtrack."

When asked about going back with Diana Ross and looking back at the footage of those two incredible days in New York, Binder said it was a lot for both of them to take in again after all these years.

"It was very emotional for her. For me, I realized it’s going to be seen by not only the generation that actually was alive 50 years ago, but new generations," Binder said. "There are Diana fans all over the world, and many of them will see for the first time why she is the superstar that she is. You certainly get that feeling if you see her live, but those who have just watched her on television over the years may never have realized. The fact that she picked this one show to represent her diamond jubilee anniversary and her birthday is thrilling to me. Watching her kids react to it is phenomenal."