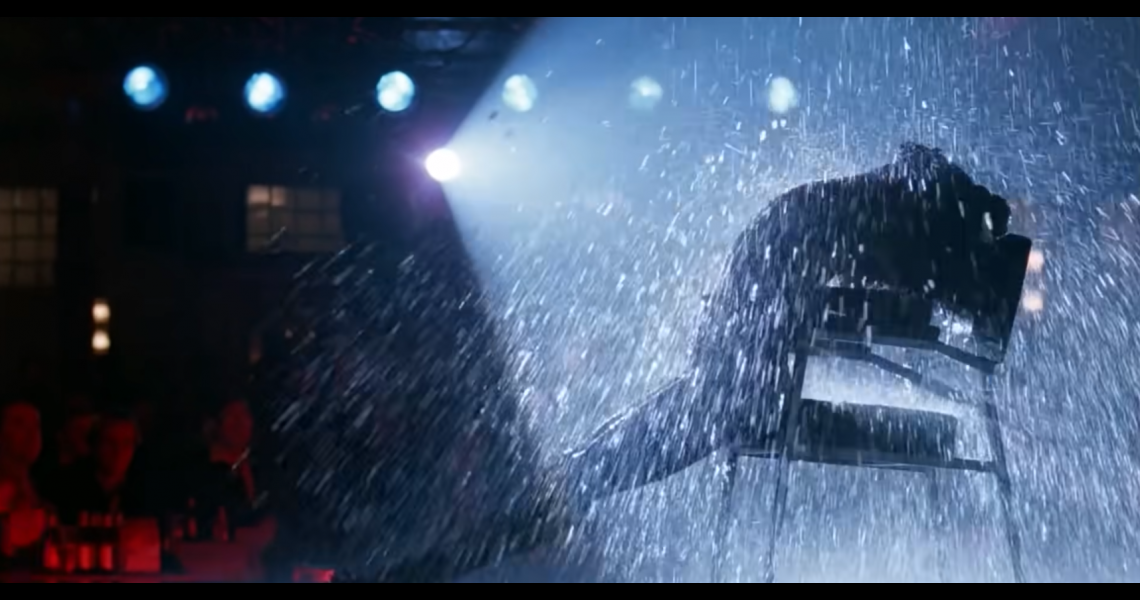 When it comes to hit songwriters of the ‘80s, it’s fair to say that there are plenty of big names who dominated the charts over the course of the decade, but if you had to pick one that particularly dominated the world of soundtrack singles, Giorgio Moroder would definitely be a major contender. Although Moroder was perhaps best known for dance music prior to the ‘80s, he definitely found a strong foothold in the world of rock during the ‘80s, as you’ll see from the below list.

1. Blondie, “Call Me”- American Gigolo (1980): Originally pitched to Stevie Nicks, who had to decline the co-writing offer because of her then-new deal with Modern Records, this track was co-written with Debbie Harry by Moroder providing her with an instrumental entitled “Man Machine” and asking her to pen lyrics to match the music. (Harry reportedly wrote the words in only a few hours.)

In the end, the music was performed by Keith Forsey on drums and percussion and Harold Faltermeyer on keyboards and arrangements, a situation which didn’t exactly thrill Blondie, who were only credited on vocals. Still, the success of the song, which topped the US and UK pop charts, made it decidedly more palatable than it might otherwise have been.

2. David Bowie, “Cat People (Putting Out Fire)”- Cat People (1982): In the wake of John Lennon’s murder on December 8, 1980, Bowie temporarily walked away from his entire career, leaving his role on Broadway as John Merrick in The Elephant Man and canceling his planned tour behind the Scary Monsters (and Super Creeps) album. It was the recording session for this song in July 1981 that brought him back to music in a big way: while he was at Mountain Studios in Montreaux, Switzerland to work with Moroder, he crossed paths with Queen, an encounter which ultimately led to “Under Pressure.”

As for “Cat People (Putting Out Fire),” it wasn’t one of Bowie’s biggest hits – it hit #26 in UK but only #67 in the US – and Bowie himself was sufficiently dissatisfied with the soundtrack version to re-record it for his 1983 album, Let’s Dance, but it remains a cult favorite, earning a second life from its use in Quentin Tarantino’s 2009 film Inglourious Basterds and 2017’s Atomic Blonde.

3. Irene Cara, “Flashdance (What a Feeling)” - Flashdance (1983): After collaborating with producer Jerry Bruckheimer on American Gigolo, Moroder was approached about repeating the collaboration on Flashdance, but Moroder refused to formally commit until after seeing a rough cut of the film. He did, however, offer up a demo that he described as “a very rough sketch” that he thought might match the film as it had been described for him, and – you guessed it – that demo became “Flashdance (What a Feeling).” The lyrics were written jointly by Keith Forsey and Cara after they were shown the final audition scene of the film, and they ended up writing the majority of those lyrics while being driven from the screening to Moroder’s studio. The end result was a #2 hit in the UK, a #1 hit in the US, and the second massive soundtrack hit of Cara’s career (after “Fame”).

4. Irene Cara, “The Dream (Hold Onto Your Dream)” – D.C. Cab (1983): While definitely the least substantial of the Moroder collaborations on this list, it’s one that’s been in our head lately as a result of Cara’s recent passing. Written by Moroder, Cara, and Pete Bellotte, the song appears on the soundtrack to the Joel Schumacher film that famously gave Mr. T a comedy spotlight, and while the film itself isn’t a stone cold classic, Cara appears as herself, which makes for a bit of fun.

5. Limahl, “The NeverEnding Story”- The NeverEnding Story (1984): Co-written by Moroder and Keith Forsey, this was the song that was supposed to propel Limahl from being the frontman for Kajagoogoo and into a career as a full-fledged solo artist. It certainly helped, since it hit #17 in the US and #4 in the UK, but it remains by far the most successful single of his career as a solo artist. The song did, however, provide Limahl with another boost in recent years as a result of its use in Stranger Things, introducing the song to a whole new generation of fans.

6. Freddie Mercury, “Love Kills”- Metropolis (1984): Perhaps most notable for being the first solo single ever released by the Queen frontman, this song was a co-write between Mercury and Moroder and was part of a unique project wherein Moroder helmed a restoration of Fritz Lang’s 1927 silent film Metropolis and also provided a new soundtrack featuring songs by Pat Benatar, Jon Anderson of Yes, Bonnie Tyler, Loverboy, Billy Squier, Adam Ant and, of course, Mercury. The song was only a minor hit in the US, where it stalled at #69 on the Billboard Hot 100, but it became a top-10 hit in the UK, climbing to #10.

7. Giorgio Moroder and Philip Oakey, “Together in Electric Dreams” - Electric Dreams (1984): If you grew up watching premium movie channels on cable in the ‘80s, then you probably stumbled across this film at some point. Starring Virginia Madsen and the recently-departed Lenny Von Dohlen, Electric Dreams revolved around a nerdy architect (Von Dohlen) who falls in love with the gorgeous cellist (Madsen) who lives in his apartment, only to get help in romance from his suddenly-sentient computer, Edgar, voiced by Bud Cort. Only in the ‘80s, right?

Anyway, this collaboration between Moroder and Human League frontman Oakey is used to great effect at the conclusion of the film, and it went on to become a top-5 hit in the UK, hitting #3 on the pop chart. It never saw formal single release in the US, but it hit #20 on the US Dance Club Songs chart, and it continues to get airplay on ‘80s stations to this day. Interestingly, the song took all of 10 minutes to record, with Oakey doing all of two takes, and if – as Oakey believes – Moroder actually used the first take, then it actually took less than 10 minutes!

8. Kenny Loggins, “Danger Zone” - Top Gun (1986): With music by Moroder and lyrics by Tom Whitlock, this song remains one of the most anthemic tracks ever to emerge from the ‘80s, but it wasn’t always destined to be performed by Loggins. Indeed, it was originally believed that it was intended for Toto, but per the band’s guitarist, Steve Lukather, they were told that only the vocals by lead singer Joseph Williams would be used, at which point they bailed. Loggins, on the other hand, revealed earlier this year that Jefferson Starship were actually the first band approached, after which Corey Hart turned it down because he preferred to write his own songs, and REO Speedwagon’s Kevin Cronin said the notes were too high for him to sing. Enter Loggins, who took the track to #2 on the Billboard Hot 100, making it his second-highest chart hit. (The highest? “Footloose,” of course.) Surprisingly, the song was only a minor hit in the UK, stalling at #45, but its legacy remains substantial even now, thanks in no small part to the release of the Top Gun sequel this year.

9. Berlin, “Take My Breath Away”- Top Gun (1986): Yes, it’s another Top Gun track, and it’s the one that Moroder has in the past described as the song of which he is most proud to have produced. It’s another co-write between Moroder and Tom Whitlock, but the original recording of the song was actually done by the Motels, who eventually released their demo on their 2001 best-of compilation, Anthologyland. In the end, however, Moroder decided to go with a version by Berlin, since he’d already worked with the band on their single “No More Words” and had an existing relationship with them. This one did go to #1, not only in the US but also in the UK. In fact, it was so popular in the UK that it reentered the charts in 1988 at #52 and then again in 1990, when it rose all the way back to #3.

10. Sammy Hagar, “Winner Takes It All” - Over the Top (1987): When it comes to father/son arm-wrestling competition films of the ‘80s, none surpass this vehicle starring Sylvester Stallone, a truck driver who ends up winning the love of his estranged son after a series of events that culminates in an arm-wrestling tournament, because of COURSE that’s how it ends. Another Moroder/Whitlock joint, the song was originally intended to be a spotlight for John Wetton of Asia, but it was decided that Wetton’s voice didn’t sound “mean” enough, whatever that means. Fortunately, Hagar was meaner-sounding, so he got the gig, and he also got the minor hit single out of it: the song only hit #54 on the Hot 100, but it made it to #3 on the Billboard Album Rock Tracks chart.

Hear more about Giorgio Moroder and other amazing 80's songwriters on the Totally 80's Podcast Best Songwriters of the 1980's episode hosted by Lyndsey Parker in discussion with Sam Hollander and Justin Tranter.