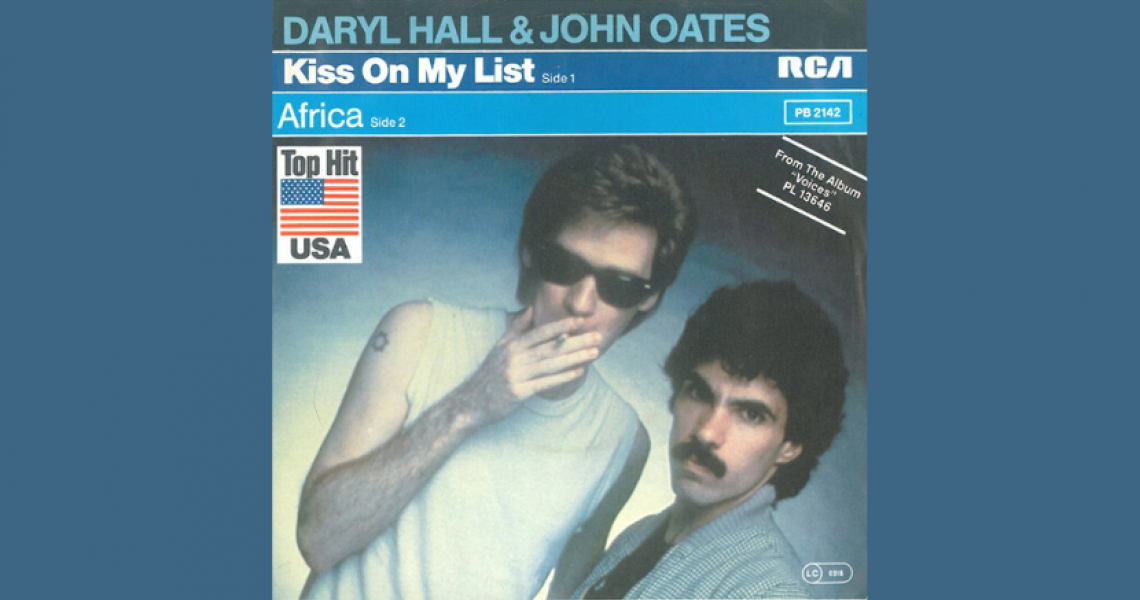 With the landmark success of the top-tier, late 70's hit "Rich Girl" under their belts, dynamic duo Daryl Hall and John Oates forged ahead into the 80's with keyboards, synthesizers, and drum machines in-hand.

Marking Hall and Oates' second blowout No. 1 hit in the states, 1981's "Kiss On My List" cemented the fact that the band had no plans of stopping their roll in the 80's. Here are six other solid facts about the large pop-rock tune that you should know!

Janna Allen, the sister of Hall's girlfriend Sara Allen, hit up Hall with the magic words, "I have an idea." As Hall recounted, "She was only 20 years old, and she said, "I have this idea for a song." I was at her apartment, and there was a Wurlitzer piano there – my Wurlitzer – and we just kind of banged it out." Their songwriting chemistry would continue to ignite with 1981's "Private Eyes," "Did It In A Minute" and 1984's "Modern Love."

Perhaps the organic energy in the song's creation process helped launch the song to mainstream likability. Janna and Hall took to the studio - and Hall quickly recorded a 8-track demo with Janna masterminding the cutting process. When Hall and Oates' management listened to the demo, they insisted on sending this first take to be included on the record.

"What you heard was literally the demo," confirmed Hall. "That's why the drum machine is so dicky and all that stuff. It was really not meant for prime time."

The saying goes, "Talent borrows, and genius steals," and Hall admitted he had no problem letting other geniuses run amok. He revealed in a 2006 interview with Mix that "[Eddie] Van Halen told me that he copied the synth part from ‘Kiss on My List’ and used it in ‘Jump.’ I don't have a problem with that at all." See if you hear the inspiration for yourself!

The single came to life as one of the featured music videos that aired during the day of MTV's debut. Nestled in between Rod Stewart's "You're Insane" and The Buggles' "Living In The Plastic Age" was the beloved contestant No. 207 and No. 1 hit "Kiss On My List."

2. MTV Regrets
Hall and Oates' popularity shot through the roof as the 80's progressed, and the duo eventually found their prior public images  - including the larger-than-life hairdo's and the muscle T's -  to be inescapable at every turn of the decade.

“Everyone has photo albums tucked away in their closet with terrible haircuts and bad clothing choices,” Oates reminisced. “My bad choices are on TV for the rest of my life. There is nothing I can do about. If I have any regrets about the MTV era, I would have been a little more discerning about the directors and the concepts we decided to use for our videos.”

Not to be confused with the sugar-coated saying "Kiss On The Lips," Hall and Oates' ubiquitous hit "Kiss On My List," pointing to a kiss being one checkmark of the many millions on guys' minds, unveiled an indifferent coolness towards the whole happily-ever-after romance thing. As Hall confirmed, "Everyone thinks it's 'I love you and without you I would die.' It's exactly the opposite of that."