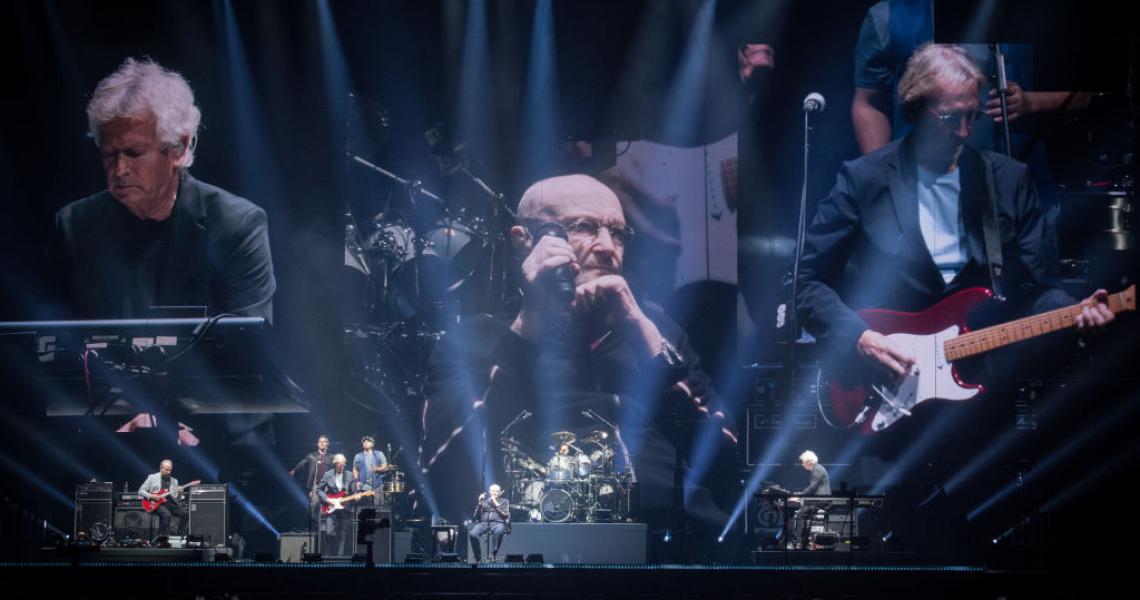 The Last Domino has fallen.

Genesis played their final concert on March 26, 2022 at London's O2 Arena - an emotional epilogue to the group's half-a-century journey as evolving rock legends. "It's the last show for Genesis," lead singer Phil Collins said from the stage. "After tonight, we've all got to get real jobs." The ensuing 23-song set

The Last Domino? Tour was an unexpected encore to the group's work together. After Collins, keyboardist Tony Banks and guitarist/bassist Mike Rutherford - the nucleus of the band since 1978, after which the group adopted more mainstream pop styles into their progressive catalogue and became one of the biggest concert draws on the planet - went out on the Turn It On Again tour in 2007, that seemed to be it for the group. They did not perform when inducted into the Rock & Roll Hall of Fame in 2010, although Collins, Banks, Rutherford and former guitarist Steve Hackett were all in attendance minus original lead singer Peter Gabriel. The quintet did reunite for a BBC documentary in 2014; a year later, Collins briefly came out of retirement from touring, although his ongoing back issues prevented him from taking the drum kit. (That honor, on that tour and The Last Domino?, went to his son Nic.)

The announcement of The Last Domino? in 2020 was a surprise, albeit one quickly overshadowed by the COVID-19 pandemic. In 2021, Genesis' European dates were finally rescheduled to later in the year, with American dates confirmed months later. Despite the presence of Collins singing from a chair due to his health problems, fans were satisfied. And the final date, featuring favorites like "That's All," "Turn It On Again," "Invisible Touch" and "Follow You Follow Me" as well as prog sides like "The Cinema Show," "Firth of Fifth," "Home by the Sea/Second Home by the Sea" and "The Carpet Crawlers," was a perfect cap to a legendary run.

"To have witnessed this last show was truly the memory of a lifetime and an event I shall hold in my heart forever," actress Lily Collins, Phil's daughter, posted on Instagram. "Endlessly grateful doesn’t begin to do it justice."

From tonight’s final #Genesis show in London (from left): #PeterGabriel, #PhilCollins, and Richard McPhail (long time friend and tour manager in the ‘70s). If you’ve not read Richard’s book on Genesis, you should. @genesis_band @itspetergabriel @PhilCollinsFeed pic.twitter.com/Zsmo0WMGr1

Another dear friend was on hand as well: Collins confirmed that Peter Gabriel was attending the show, although he did not join them onstage. "Maybe he's the one shouting for 'Supper's Ready'!" the singer quipped, referring to the 23-minute opus that closes the band's 1972 album Foxtrot.