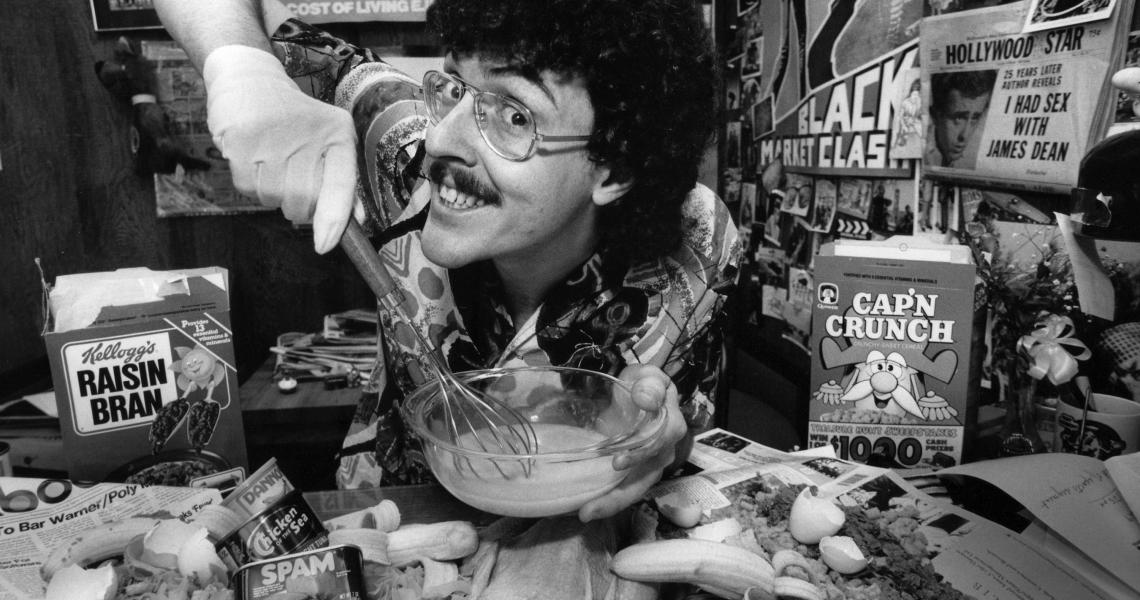 No one on the radio in the '80s (and beyond!) made us laugh harder than "Weird Al" Yankovic. The Hawaiian shirt-clad, accordion-playing comedian has been expertly parodying pop songs for more than 40 years. And people still can't get enough of him: his 14th album, 2014's Mandatory Fun, became his first No. 1 album, and he's the subject of an upcoming book of photos taken by his longtime drummer Jon "Bermuda" Schwartz.

Weird Al had a knack for turning a hit song into a comedic masterpiece - often with an equally silly video for MTV. Let's run down 10 No. 1 pop hits that he made his own!

Al's second major single (after a take on The Knack's "My Sharona" entitled "My Bologna," recorded in the bathroom of his college radio station!) combined the grooves of Queen's "Another One Rides the Bus" with a frenetic squeeze-box performance and new lyrics about the horrors of public transportation.

DID YOU KNOW? Al recorded this live on the comedy radio program The Dr. Demento Show. Bermuda Schwartz, whom Al met that day, banged on his accordion case to keep rhythm.

One of Al's most popular lyrical themes is what's on the tube, and he compressed years of I Love Lucy reruns into this peppy parody of Toni Basil's "Mickey," the kick-off to his self-titled debut album.

DID YOU KNOW? The voice of Lucy on the song is Tress MacNeille, later renowned for voice work on cartoons like The Simpsons and Animaniacs.

Though he's been a strict vegetarian for decades, one of Al's biggest vices - and his other favorite lyrical theme - is writing about junk food. For his take on Joan Jett and The Blackhearts' monster hit "I Love Rock 'N' Roll," Al took a trip to the ice cream parlor to give comedy lovers the scoop.

DID YOU KNOW? Shooting the video was not so sweet: they're scooping mashed potatoes onto each ice cream cone, because the real thing would melt under the set lights!

Considered a novelty act for the first few years of his career, Al turned heads with this expert parody of Michael Jackson's smash "Beat It." Michael-mania was so intense that "Eat It," off his second album In 3-D, became a hit in its own right, reaching No. 12 on the Billboard Hot 100!

DID YOU KNOW? The song also won Al his first of five Grammy Awards.

Now a staple of MTV alongside the stars, Al's next act was to kick off the album Dare to Be Stupid with this lampoon of Madonna's image, medical school-style. "Like a Surgeon" skewered "Like a Virgin" with more precision than the inept doctor character that sings the song.

DID YOU KNOW? "Like a Surgeon" is one of the only parody ideas that ever came from an artist. Madonna joked about the concept to a friend, who happened to know Al's manager and passed along the suggestion.

One of Al's lesser-known parodies (mostly because there was no video to accompany it), this riff on Robert Palmer's "Addicted to Love" glorifies the humble potato and the many ways one can prepare it.

DID YOU KNOW? When playing the track in concert, Al was accompanied by a pair of dancers dressed up as Mr. and Mrs. Potato Head.

After the comparative failure of Al's Polka Party album, Yankovic bounced back with the popular Even Worse and lead single "Fat," a super-sized version of Michael Jackson's "Bad."

DID YOU KNOW? Amused by "Eat It," MJ not only granted Al permission to do another parody but let Al film the "Fat" video on a recreation of the "Bad" video's set that he created for his Moonwalker film.

Another favorite off Even Worse, Al cracks on the repetitive nature of the '60s staple that George Harrison took to No. 1 in 1987.

Hope you're hungry for seconds...or thirds...or fourths! Al prepped yet another food-related parody, an Italian-style rendition of the Mexican folk song that became a hit for Ritchie Valens in 1958 and Los Lobos in 1987 (for a Valens biopic, also called La Bamba).

DID YOU KNOW? Al originally thought to record the entire song in Italian, backing off once he realized most of his audience probably wouldn't understand the jokes.

For the soundtrack to his cult-classic film UHF, Al changed the channel on the Dire Straits chart-topper, combining the tune with the lyrics to "The Ballad of Jed Clampett," the theme to the long-running '60s sitcom The Beverly Hillbillies. UHF was a surprising box-office failure, but good things were coming to Al in the next decade - and beyond.

DID YOU KNOW? Dire Straits frontman Mark Knopfler agreed to Al's parody on one condition: that he and keyboardist Guy Fletcher play on the track, too.