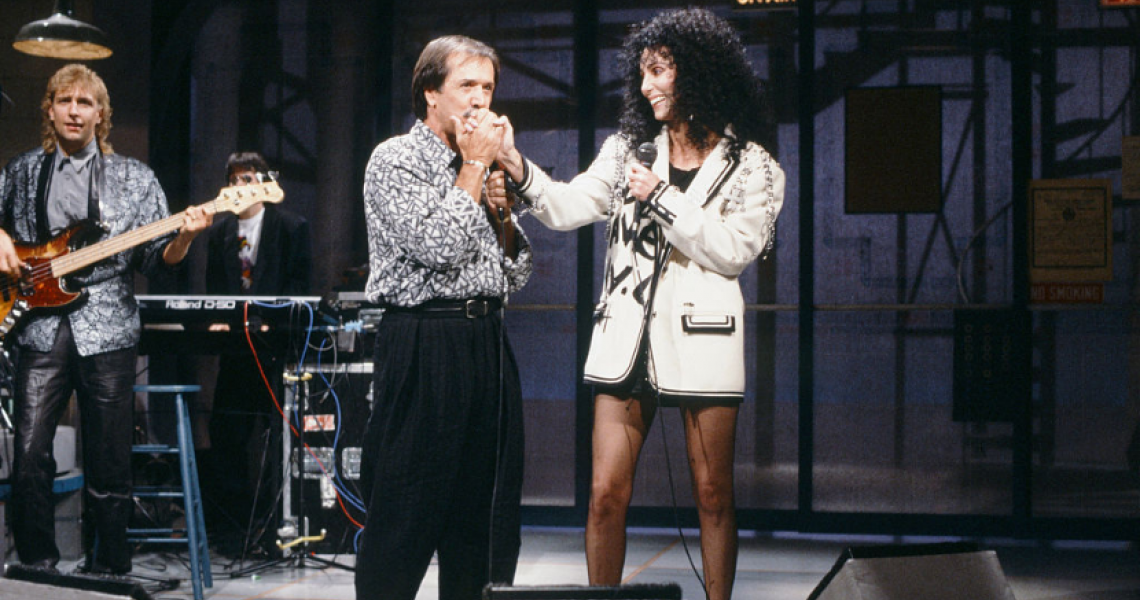 Today we celebrate the birthday of a man beloved by fans of off-kilter comedy, snappy sarcastic comebacks, and the biggest damn beard you ever did see on a talk-show host: David Letterman.

No, Dave’s not much of a singer...unless, of course, you count a certain number from Cats, in which case he’s the bee’s knees.

Sorry, where were we? Oh, right, we were going to talk about one of the most iconic musical moments ever to take place on Late Night with David Letterman: the night Sonny Bono reunited with his ex-wife, Cher, and performed their signature hit, “I Got You Babe.”

Of course, prior to appearing alongside Sonny, Cher had already made an appearance by herself, and it was one that contains one of the most infamous moments in the show’s history.

What happened? Well, spoiler alert: not only does the title of the following video give it away, but it tells you exactly when the moment happens.

Read More: July 1989: Cher Rocks the Charts with "If I Could Turn Back Time"

It was about a year and a half later, on Nov. 13, 1987, that Sonny and Cher appeared on the show, but while they were both guests that night, their reunion wasn’t planned out in advance. Sonny talked about his career, saying in a self-deprecating manner than belied the truth of the remark, “I didn’t leave show business, it kind of left me for awhile,” then adding in a more serious tone, “After Cher and I broke up, it got really hard for me. I love show business, but it got hard.”

Before Cher came out, Sonny made a remark about the evolution of his relationship with Cher that was decidedly poignant: “Cher and I have a thing that no one else will understand, we could call each other names but when we see each other it goes right back to the beginning. That won’t ever go away.”

After Cher emerged and seconded Sonny’s remarks about their relationship and saying, “We have a very strange relationship that no one will ever understand, except us, and I don’t think I even understand it a lot,” Dave dared to ask if they thought they could ever see themselves getting back together again. One presumes that he meant from a musical standpoint, but Cher got a laugh by taking it at its surface: “[Sonny’s wife] Mary wouldn’t like that too much right now: she’s pregnant!”

From there, Dave asked if the duo would consider giving “I Got You Babe” a go, and to the delight of everyone in the studio, everyone watching at home, and millions of people who’ve watched the clip since, they agreed. It was a remarkable moment to see these two individuals singing the song that made them famous for the first time in many years – and, as it turned out, for the last time ever.

Fortunately for you, a gentleman named Don Giller has - over the course of the past several years - become the de facto keeper of the Late Night with David Letterman legacy, and he’s been kind enough to upload the Sonny and Cher episode of Late Night to YouTube in its entirety.

Do yourself a favor: don’t just fast-forward to the iconic bit. Watch the whole damned thing.

Consider it a birthday present for your old TV pal Dave.