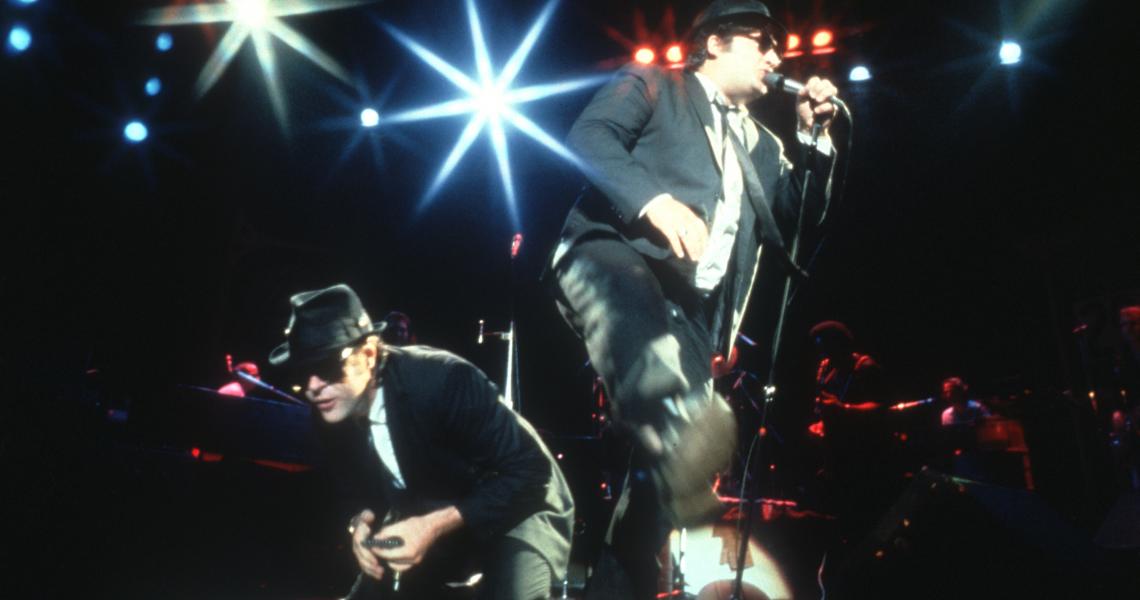 On Feb. 3, 1979, two members of Saturday Night Live’s Not Ready for Prime-Time Players, Dan Aykroyd and John Belushi, sat atop the Billboard 200 with their debut album, Briefcase Full of Blues, a live LP of blues and soul covers recorded at the Universal Amphitheater in Los Angeles.

This, of course, begs one very important question: how the hell did two SNL cast members end up with a No. 1 album?

Oh, sure, we could just say, “It was the ‘70s,” and leave it at that, but...that wouldn’t be very sporting of us, now, would it? So instead we thought we’d give you a bit of a history lesson about how these two very funny gentlemen became chart-topping singers.

It began on Jan. 17, 1976, when Saturday Night Live got some additional use out of their well-documented stockpile of bee costumes by letting Howard Shore and his All-Bee Band back up Belushi (on vocals) and Aykroyd (on harmonica) on a cover of Slim Harpo’s “I’m a King Bee.” Despite Belushi’s oft-expressed loathing of the bee costumes, this was arguably the best possible compromise they could’ve found to get him into one again.

With Belushi’s love of blues growing and Aykroyd’s appreciation of the genre already solidified, another turning point came when Belushi was filming National Lampoon’s Animal House and went to see Curtis Salgado in concert in Eugene, Oregon. The two bonded over the blues, with Salgado loaning him some albums by guys like Charles Brown and Johnny “Guitar” Watson, and it wasn’t long before Belushi started joining Salgado onstage at his shows to perform “Hey Bartender,” which ended up being one of the songs performed by the Blues Brothers when they made their debut on Saturday Night Live.

As you might imagine, given the viewership of SNL at the time, it didn’t take long for the Blues Brothers to become a phenomenon, as evidenced by Briefcase Full of Blues. When the album was recorded, the Brothers were actually opening for Steve Martin, and when New Year’s Eve rolled around, they and the New Riders of the Purple Sage shared opening-act duties for the Grateful Dead at their show at the Winterland.

Of course, you already know what happened after that: Aykroyd and Belushi teamed up with director John Landis to make a movie. The Blues Brothers was quite the cinematic endeavor, costing $30 million to make - you can imagine that more than a little bit of that was spent on car-chase sequences - but ultimately more than making back the expenditure, earning $115 million at the box office. Critics were mixed with their opinions, but when you make that kind of money in ticket sales, who cares what the critics think?

Unsurprisingly, in addition to the film’s success, the soundtrack was also a massive success, and it was followed by a second live album - 1980’s Made in America - and a best-of collection, appropriately titled Best of The Blues Brothers.

Contrary to anything you may have heard, The Blues Brothers broke up after Belushi’s death, and there’s never been anything else released since, but certainly not a sequel to the movie, so... What’s that? People can just use the internet to confirm that that’s not true?

Okay, yes, fine, there was a sequel to the film - Blues Brothers 2000 - which was released in 1998. But if you want to hear something that really feels like a sequel, then we’d recommend that you check out the oft-forgotten 1992 studio album Red, White & Blues which, despite the absence of Jake Blues, is still worth hearing, thanks to the participation of Steve Cropper, Donald “Duck” Dunn, Lou “Blue Lou” Marini, Matt “Guitar” Murphy, Alan “Mr. Fabulous” Rubin, and guest vocalists Eddie Floyd, Larry Thurston, and backing vocalists Carla Thomas and Leon Pendarvis.