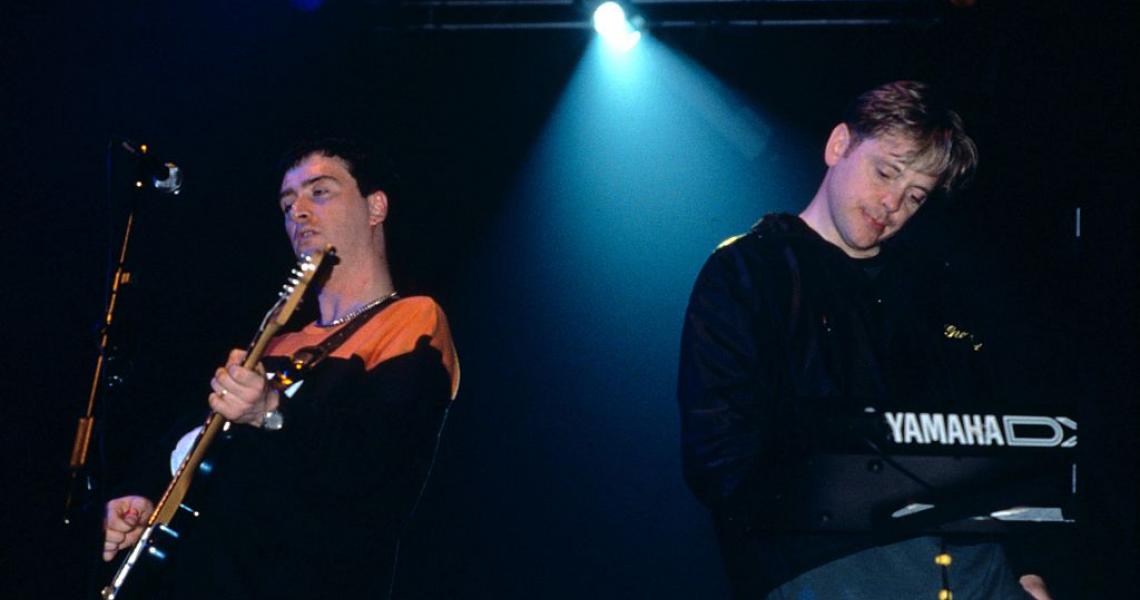 On May 27, 1991, Electronic released their self-titled debut album, an LP which brought together the lead singer of New Order, the guitarist for The Smiths, and one of the Pet Shop Boys to produce some of the catchiest “college rock” of the ‘90s.

Johnny Marr is two years out of The Smiths and enjoying the opportunity to play with a variety of different artists, including Bryan Ferry, the Pretenders, Talking Heads, and The The.

New Order has milked three singles out of their latest album, Technique, putting Bernard Sumner in a position to contemplate doing a solo album.

The Pet Shop Boys are post-Introspective but pre-Behavior, thereby giving Neil Tennant a bit of downtime.

When Sumner realized that you tend to be rather solo when working on a solo album, he decided to call Marr - who he’d first met in 1984 during a Quando Quango session - and ask if he’d up for helping him put something together. As to Tennant’s involvement, it’s been said he found his way in after Factory Records artist Mark Farrow told him about the collaboration between Sumner and Marr and found it intriguing enough to reach out to them about chiming in.

But, hey, why should we rely on phrases like ‘it’s been said” when we can just go straight to the Marr’s mouth and find out from the aforementioned guitarist himself how Electronic initially came into existence and recorded “Getting Away with It”?

“Getting Away with It" happened because Pet Shop Boys and Bernard and I had some mutual friends. And the word kind of got around that Bernard was doing something aside from New Order, and he was doing it with me. And then Neil and Chris [Lowe, a.k.a. the other Pet Shop Boy] have always been very creative collaborators with, you know, Dusty [Springfield] and Liza Minelli and [David] Bowie - and we just kind of got put together, really, by friends on a social basis. But Bernard and I had been feverishly concocting ideas and ideas. And then we made this plan.

Neil and Chris had plans to come up and go to the Haçienda for the first time. And Bernard and I were working out of the bedroom of my house at first, and then I built a more elaborate studio in my house. And I’ve always tried to arrive at any kind of collaboration not empty-handed. Still, to this day, I try to come a little bit prepared. So either the day before Neil and Chris arrived - or I think probably the day they arrived, on the Saturday afternoon, I went in the studio and wrote. We needed have something to start with, so I wrote the chorus, this chunk of music, which was the instrumental of what turned out to be "Getting Away With It."

So I had the chords and the topline, and David Palmer was also living at my house at that time - he was in The The with me, he was most known for being in ABC, a really cool, amazing musician. So David programmed the drums. This was in the afternoon when Neil and Chris were coming up. So when they arrived, I had this kind of chunk of music going round and round, which became the chorus of "Getting Away with It." I think Neil very quickly had the lyrical hook, and he was going to go away and write the words. So within probably about 20 minutes, we started working on it. And then Bernard came up with the verse chords, and I remember Chris doing the bassline, and then Neil arranging it, saying, "This but should around that bit twice," and so all four of us just really kind of got in with the ingredients and we had this backing track. And then we all went out to the Haçienda, as you as do. And the next day we reconvened at some point in the afternoon wrote a second song together, "The Patience of a Saint.”

Electronic’s self-titled album also featured singles like “Get the Message,” “Tighten Up,” and “Feel Every Beat,” putting both Sumner and Tennant’s voices front and center on the airwaves for a great deal of 1991. Neither of the group’s follow-up albums made quite as much of a commercial impact, but in truth, Electronic could’ve simply coasted on the awesomeness of “Getting Away with It” forever and called it a day after that one song.

“The standout track for me, without a doubt, is ‘Get the Message,’” says Marr. “First of all, it sounds like a magical song. It did from the moment I wrote the music for it. But then, particularly when Bernard wrote his parts for it. I just really think it was it was a great listen – still do. I play in my live set to this day - I realised that no other band sounded like it before. Particularly New Order and The Smiths.

“When it came out as a single, and I occasionally heard it in a clothes shop or on the radio, I was able to stand back and go, ‘That is a unique record,’” Marr continued. “There may be some elements where you know it’s me because of the guitars, and obviously it’s Bernard singing it, but it just completely has its own place. We never did anything like it since. I was really so
happy when Bernard did his vocal on it. I think it’s a great vocal. It felt like I’d really been allowed to make a breakaway. And also, what was going on as well was - it really felt like the times, but without having a pounding four-four beat or house piano.”

And how does Marr look back on the album when listening to it 30 years on?

Well, it really strongly brings back that sense of time and place, because it was a very unusual time that Bernard and myself found ourselves in - and not by design. For me personally, it was a very important time in my life, because on a day-to-day level, I was still very much dealing with the fallout from the breakup of The Smiths, and a lot of the nonsense that was going on behind the scenes and in the media and all of that, when I was still very young. But then, at the same time, I was embarking on a very exciting and kind of mysterious sort of adventure - the thrill of the unknown with Bernard.

And furthermore, more importantly, we realised that pretty much as we were going, right on our tails, like a tidal wave coming up behind, was this complete revolution in the culture in our own city [Manchester, England] - which pretty much became the most important city in the world, culturally, for a while. But when Bernard and I got together, initially, there was, of course, the musical agenda. We were excited about that. And I can look back now and say, well, there was a certain amount of us finding a bit of sanctuary from both having been in these intense Manchester groups. And we were getting to know each other, too, because we didn’t know each other that well on a personal level. But that we got to know each other very quick.

And Bernie had moved into my house. So Electronic became what we were doing. But as I say, at the same time, unbeknownst to us, ecstasy started to arrive, and the Haçienda suddenly started filling up, which no one would have imagined. And house music and Technotronic and MIDI and Macintosh computers and flares and 808 State, S’Express and club culture. It all kicked off like a week after we first started. And then we found ourselves with some other people, right smack-bang in the middle of it and being affected by it - and affecting people by it. And in my case, I was only 24. So, you know, my hometown suddenly became the centre of the universe and I had this new songwriting partnership, which we were working on every day. And we just gathered momentum really, really quickly. And off we went.

It was an amazing time. So I hear all of that in the songs.