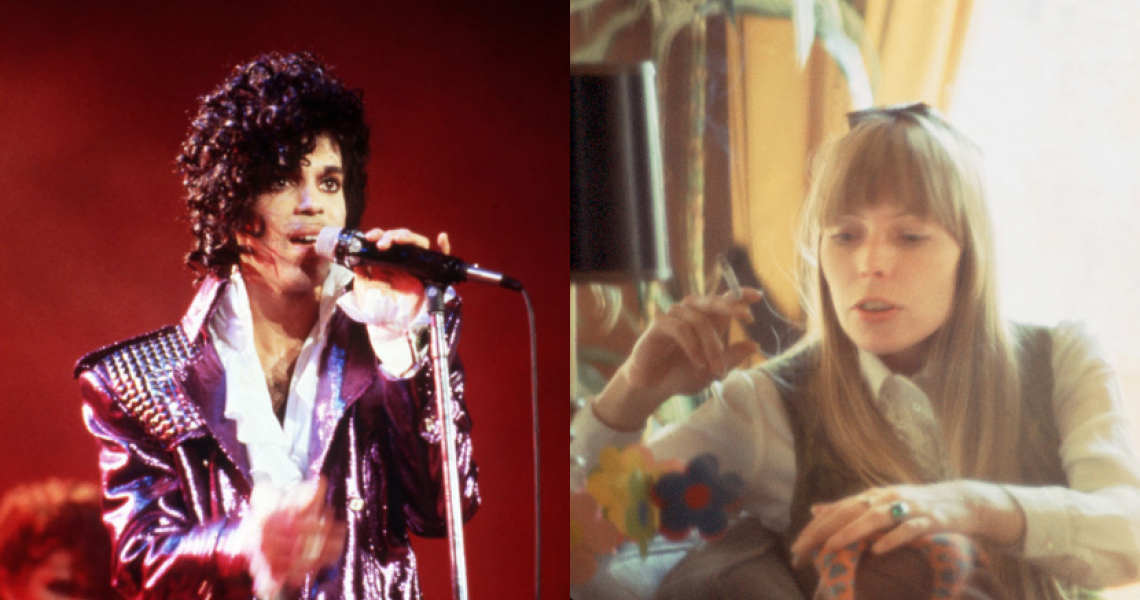 Joni Mitchell's work is among the most powerfully influential of her generation. Her music has been upheld as an example for folk musicians, the soft acoustic sounds of Laurel Canyon in the '70s, and even generations of female singer-songwriters with strong personal perspectives in their songwriting. Her influence bears considerable fruit lately: in December 2021 she was awarded the Kennedy Center Honors, and in 2022 she will be named the MusiCares Person of the Year before the Grammy Awards.

But there might not be a better sign of her cross-genre, cross-generational appeal than by considering the influence she had on a great rock/soul artist: Prince.

The Minneapolis legend's sensual approach to funk, rock and soul might not be a super-obvious match to an album like Blue, but he was open about his love for Joni from the beginning. One of the headlines on the album cover to 1981's Controversy shouts her out by name, and he routinely returned to her work for inspiration. In 1985, now a star thanks to the blockbuster Purple Rain and pressed by Rolling Stone to name a current pop record that caught his fancy, he sidestepped. "The last album I loved all the way through was The Hissing of Summer Lawns," he said, referring to a jazz-inspired record Mitchell released a decade before.

For her part, Joni remained grateful of Prince's fandom, if a bit bemused. She recalled to New York that she remembered him at one of her concerts - reportedly years before he had even started recording music himself - and would also note that he'd continue to write her fan letters, some of which would get thrown away after her management "took it as mail from the lunatic fringe." But she admitted she couldn't always hear the influence she had on his work, discussing an encounter she had with The Artist in a radio interview with Morrissey in 1985:

There was a harmonic passage in one of the songs that really interested me, and I said to him, “Oh, you know, where’s that coming from?” Because it sounded fresh to me, you know, and he said, “You,” you know, and I couldn’t hear it. But time went by and I heard something and it was—the reason I couldn’t hear it was because it was something that Larry Carlton played against my architecture which I’m very familiar with and I’m familiar with what I added also, but—yeah, he’d taken something between those two things. You know what I’m saying?

Prince corroborated this theory a decade later when playing songs to Rolling Stone in 1996. He'd continue to carry a flame for her work: "The Ballad of Dorothy Parker," off 1987's masterwork Sign O' the Times, quoted Joni's "Help Me" directly, and he sent her an outtake from the album, "Emotional Pump," in the hope that she'd record it. (She never did.) But speaking about a song off his triple-album Emancipation, he declared, "Bass, piano and silence. Joni Mitchell taught me that. If you listen to her early stuff, she really understands that.”

The duo most fully crossed paths in 2002, when Prince covered Blue standout "A Case of You" for his intimate piano-vocal album One Nite Alone... Fifteen years later - after Prince's tragic passing in 2016, and as Mitchell was recovering from an aneurysm that took her out of the public eye - the posthumous Prince rehearsal tape Piano & A Microphone 1983 featured a faithful rendition of the same song tucked between an early version of "Purple Rain" and a jam on the spiritual "Mary Don't You Weep."