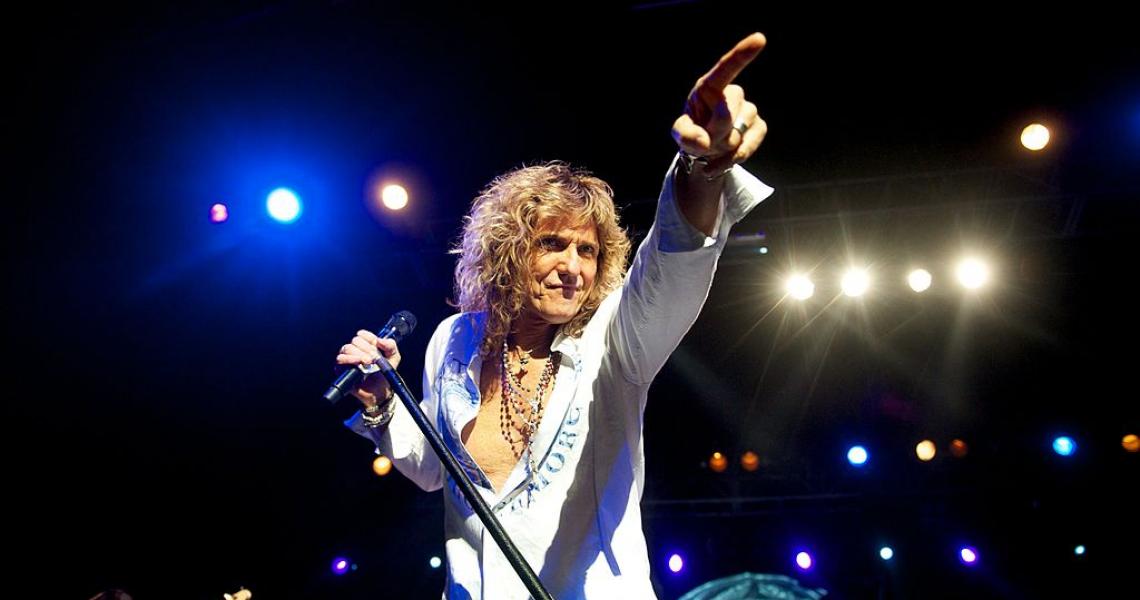 David Coverdale was an English gentlemen best known for briefly fronting Deep Purple during the ‘70s until founding his own band a few years later. Perhaps you’ve heard of them: they’re called Whitesnake, and although they first began in 1978, they’re still going strong even now. Oh, right, and during the ‘90s he took a little time off to record an album with Jimmy Page. We’ve put together a dozen songs that serve as a handy-dandy sampler of Coverdale’s best – and, yes, most hard-rockin’ – tracks from his back catalog.

Deep Purple, “Burn” (1974): The title track of the band’s eighth studio album was also their debut with a then-unknown fella by the name of D. Coverdale fronting the band. In a retrospective review on AllMusic, critic Eduardo Rivadavia described it as “actually challenging the seminal ‘Highway Star’ for the honor of best opener to any Deep Purple album.” High praise, indeed, and certainly a solid start for our man David in the band.

Deep Purple, “Stormbringer” (1974): Coverdale’s second album with Deep Purple was actually guitarist Richie Blackmore’s final album with the band...or at least the final one that he would do with Coverdale, anyway. This title track is definitely a dark, foreboding piece of music, and it’s once again the album opener, providing some consistency in terms of grabbing the listener from the get-go.

Deep Purple, “You Keep On Moving” (1975): Come Taste the Band was Coverdale’s final endeavor with Deep Purple, as they would disband in the wake of the LP’s release. But he stuck with them through the subsequent tour, as evidenced in this clip of the band performing the song – the album’s closing track – in Japan.

Whitesnake, “Ain’t No Love in the Heart of the City” (1978): Written by Michael Price and Dan Walsh and originally recorded by Bobby “Blue” Bland in 1974, Whitesnake recorded their cover of the tune four years later for their debut EP, Snakebite. These days, you can find it tacked onto the end of the reissue of the band’s first full-length LP, Trouble, released the same year.

Whitesnake, “Walking in the Shadow of the Blues” (1979): Co-written by Coverdale with bandmate Bernie Marsden, this track may not have been released as a single, but over the years it’s come into its own as the most popular track on the band’s sophomore effort, Lovehunter.

Whitesnake, “Don’t Break My Heart Again” (1981): Taken from Whitesnake’s fourth album, Come an’ Get It, the LP itself was the band’s highest charting album at that point, only being kept from No. 1 on the U.K. Albums chart by Adam and The Ants’ Kings of the Wild Frontier. Meanwhile, this single was a Top 20 hit in England, although it failed to chart in America.

Whitesnake, “Love Ain’t No Stranger” (1984): Between this track and “Slow an’ Easy” scoring airplay on MTV, the band’s Slide It In became their first significant mainstream success in America. It would not, of course, be the last.

Whitesnake, “Still of the Night” (1987): And so we come to Whitesnake, the band’s biggest selling album thanks to a number of hit singles and – lest we forget – hit videos. This was the first of the bunch, and not to undersell the song itself, but we must remember just how important the presence of Tawny Kitaen was to the young male viewers who scooped up copies of that self-titled album.

Whitesnake, “Give Me All Your Love” (1987): In fact, the video for this track can be easily identified as “the one that doesn’t feature Tawny Kitaen,” but it does feature a great guitar riff and – in the 1988 single mix – a smokin’ guitar solo from future Def Leppard axe man Vivian Campbell.

Coverdale/Page, “Pride & Joy” (1993): After spending so many years being compared vocally to Robert Plant, it landed somewhere between obvious and too obvious when it was announced that Coverdale was collaborating on an album with Led Zeppelin guitarist Jimmy Page. The end result was solid, maybe not as spectacular as Whitesnake fans thought it was, but certainly better than many Zeppelin fans claimed it to be. But don’t take our remarks as the gospel, just give a listen to the album’s first single for yourself!

Whitesnake, “Good to Be Bad” (2008): Although the band hasn’t really been a force to be reckoned with on the singles charts in awhile, Whitesnake continue to record and tour, and this track is probably the best example of how strong their more recent work continues to be, even more than 20 years on from “Still of the Night.”