April 1987: Aretha Franklin & George Michael Hit #1 in America with "I Knew You Were Waiting (For Me)" 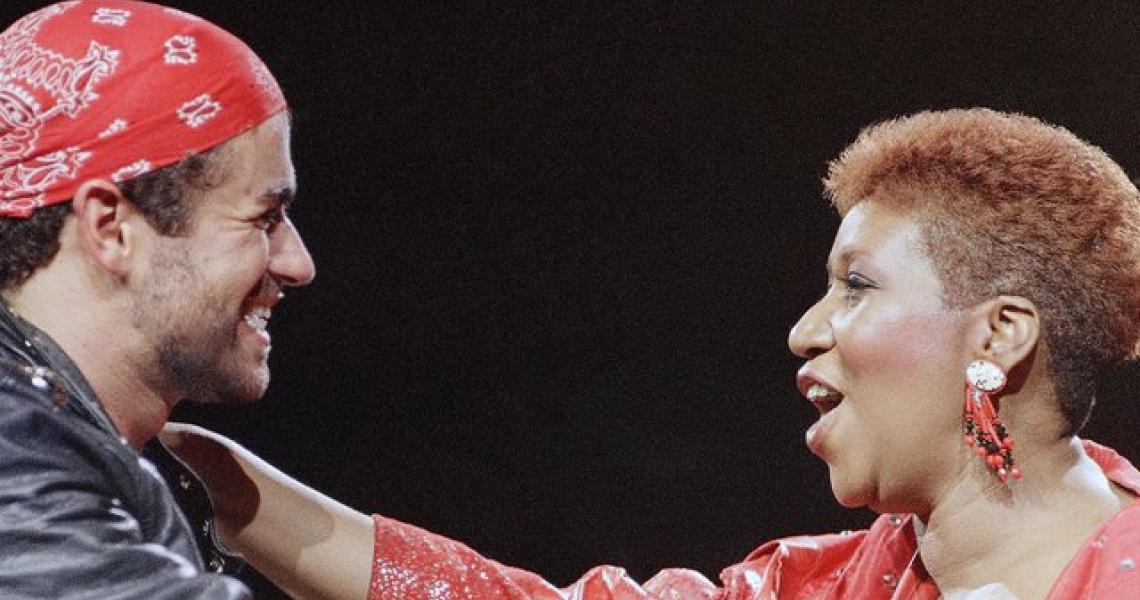 Released as a single in January 1987, "I Knew You Were Waiting (For Me)," the blockbuster duet that matched music icons Aretha Franklin and George Michael, soared to #1 on the Hot 100 for the week of April 17, 1987. It would hold the top slot for two weeks, eventually dethroned on May 2 by Cutting Crew's "(I Just) Died in Your Arms." Here are five fun facts about the legendary collaboration.

1. The duet came together at the suggestion of Clive Davis
Songwriters Simon Climie and Dennis Morgan had just started working together when they came with the tune. It was only the third song the pair had written together. "That was one of those songs that came out of mid air – a gift from above, if you will," is how Morgan explained it in The Billboard Book of Number One Hits. When they presented the song to Clive Davis at Arista Records for an artist like Tina Turner or Aretha Franklin, Davis thought it would be a great duet for Franklin and George Michael, who'd recently left Wham! to strike out on his own at the time.

2. Aretha Franklin and George Michael were big fans of each other
Michael had been approached in 1984 to write a song for Aretha Franklin that would be used for a movie soundtrack. Overwhelmed with Wham! and the fear of penning something for one his idols proved too daunting, and he declined. So the singer jumped at the chance to work with Franklin when this opportunity presented itself.

"The first time I heard George was with Wham! and I liked it then," Franklin told Entertainment Weekly in 2017. "He had a very unique sound, very different from anything that was out there. When Clive suggested we get together for 'I Knew You Were Waiting,' I was all ready. It reminded me of [working with producer] Jerry Wexler. We’d go in the studio and cut songs. If we were happy with what we recorded, Jerry would say, 'Let’s wait until tomorrow. If we feel the same way [then] that we do now, maybe we have a hit.' 'I Knew You Were Waiting' had that. Musically, it does not grow old. [When we made the music video], we had a super time. He was calling most of the shots: how he wanted this, how he wanted that. My older sister, Erma, just fell for him right away. He was very friendly and personable, easy to talk to."

3. George Michael was a bundle of nerves working with his idol
“I was nervous,” the singer admitted in his biography Bare. “I knew that Aretha would get the melody and then take it all over the place, which sounds great, but the thing also needed tying down … I just tried to stay in character, keep it simple. It was very understated in comparison to what she did.” He would elaborate to BBC in 2014: “We did end up doing the chorus together, which was phenomenal—she wanted to do it that way. I’m standing there just freaking out. I’m on the other side of the mic from Aretha Franklin and she’s treating me like an equal—obviously I’m not, but she was treating me with such respect."

4. The pair performed the song live together when George Michael's Faith tour hit Detroit
Any doubts that Franklin and Michael had real chemistry together were dashed when she made a surprise appearance when he brought the Faith tour to his hometown of Detroit. "There is a very good chemistry onstage between the two of us," she told a TV reporter. "I found him to be warm, and highly professional, and that's certainly my cup of tea. He's very technical about what he does. He has fun." Watch rare footage of the performance and interview above.

5. "I Knew You Were Waiting (For Me)" was Aretha Franklin's only #1 in the UK
Despite a catalog packed with perennial classics, Aretha Franklin was only able to hit the top spot in merry old England with the help of George Michael. In America, it was her second #1 on the Hot 100. The other #1: "Respect," in June 1967.

BONUS FACT: When George Michael went to Detroit to record the song, Franklin took him to the locally famous Parks Old Style Bar-B-Q, which has been open since the early '60s. It's still open today: "He likes barbecue." Watch her talk about it below.