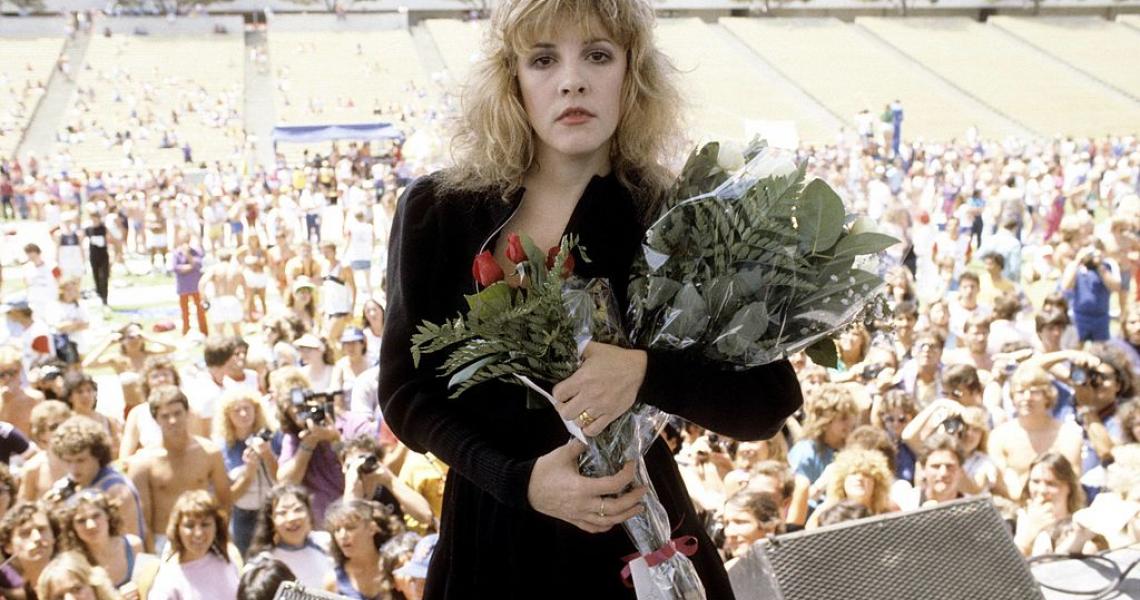 One of Stevie Nicks' most famous and enduring songs was inspired by none less than Jane Petty, wife of the late rock legend Tom Petty.

"She told me that when she met Tom he was, she said, 'at the age of seventeen' but she has this incredible southern drawl so it sounded like 'edge of seventeen,' Nicks revealed in a 1981 interview. "I said, 'Jane, I'm writing a song called Edge of Seventeen.' And she laughs, you know, she didn't ever think I was ever serious. So it started out about Tom and Jane basically, who I have no idea what they were at 17, but I made it up."

The song's other big inspirations: John Lennon and Nicks' own uncle, both of whom passed away within a week of one another. She was living in L.A. with music exec Jimmy Iovine when they got the news that Lennon had been killed. Iovine, who was close with the former Beatle, was devastated.

"Then one grey day, the fairy tale ended... Jimmy's friend was dead... But Jimmy's love for John did not die. A terrible sadness set in over the house, there was simply nothing I could say. So I went home... Jimmy would have to go this one alone," Nicks shared in the liner notes of 1991 hits collection, Timespace.

Returning to her hometown in Phoenix, Nicks would sit with her ailing uncle, and was at his bedside when he died: "I sat there and held his hand, and sometime right about sunset, he turned his head slightly to John, and then to me, and his hand slowly let go of mine. I did run out into the hallway, but no one was there... and the white winged dove took flight..."

"Edge of Seventeen" would be the third single from Nicks' debut solo album, Bella Donna. Featuring an all-star cast of musicians including Benmount Tench of Tom Petty's Heartbreakers and Roy Bittan of Bruce Springsteen's E Street Band, the song's recording sessions were heavy and emotional affairs.

"The energy that was written into that song was so intense that it took us about two nights to get the track to that, and it's like nobody's feet ever stopped moving," Nicks told Vox magazine in 1992. "It was like there was this energy that was so strong. I cried in the middle of the bridge thing, about the sea never expects it when it rains but the sea changes color, but the sea does not change. And so with the slow graceful flow of age, I went forth with an age old desire to please. It was like, well we have to keep going now. And I wanted that song to have all that energy of them and of us going on."

"I have to deal with it every single night when I sing it," Nicks admitted to The Sun in 1991 about the song's hallowed space in every concert that she performs. "That's why I can [sing it]. When that song starts, I go back to that week. And it's not like I try. I don't make a physical effort to do it. In my mind, my little timespace, I'm back in the house at Encino finding out that news, and when I sing it to everybody, I try to make them understand in a way what I was talking about without actually telling them. That's why I can sing 'Edge of Seventeen' just like I wrote it yesterday. Because it will never, ever lose the intensity. I will never forget how I felt when that happened to me. And when people read this, they're going to understand that this hasn't been so glamorous, and each one of these songs was one more chip off an already broken heart."