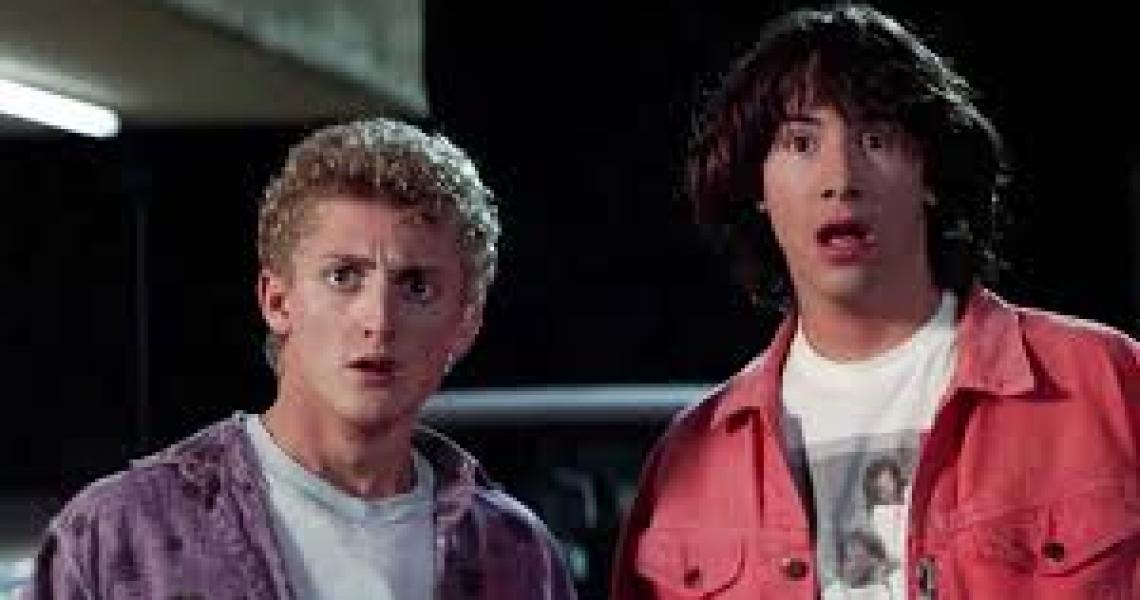 They came up with the idea of Bill and Ted revisiting history and interacting with figures like Genghis Khan and churned out a movie script in less than a week. With Alex Winter and Keanu Reeves cast as the boyish, suburban slackers, the Stephen Herek-directed film saw the dynamic duo come to life as the two jump into a phone booth time machine to pass their high-school history final and ensure their band Wyld Stallyns goes on to revolutionize history.

Released in 1989, Bill & Ted's Excellent Adventure captured the potent spirit of late '80s California culture by illustrating a world packed with bustling bowling alleys, booming malls, and cheeky burnouts defying their oppressive teachers and parents. We're celebrating the two friends and their adventures with a recap of the 7 most excellent moments from the classic '80s flick so pick up your air guitar and buckle up for the ride below.

During a conquest to film the most triumphant music video for their up and coming band, Wlyd Stayllns, Bill and Ted realize that their ensemble will never achieve true superband status without the recruitment of shredmaster Eddie Van Halen.

Bill and Ted prove themselves to be subpar students with a chronic lack of historical knowledge as they feign their expertise in class until the teacher calls them out for addressing Julius Caesar as a "salad dressing dude."

5. "Strange things are afoot at the Circle K"

The Angeleno garage band heroes are confronted with a dude from the future, Rufus (George Carlin), and his phone booth time machine who is ready to help the two pass their history class and air guitar with their future selves.

The duo make their first stop at a saloon in the old Wild West where they meet their first target, Billy The Kid, who recruits them for a game of poker.  As Billy deals out cards, Bill instructs Ted on how to maintain a cool poker face, which vanishes instantly when Bill realizes he's been dealt a winning hand.

The twosome trek on over to Ancient Greece next to check out Golden Age of Civilization. They approach So-crates and enlighten the great philosopher with three magical words: "Dust, wind, dude!"

Temporarily left on their own, ​​​​​​​Bill and Ted's historical recruits run amok at the San Dimas mall in incredible scenes that involve Joan of Arc leading an aerobic class on-stage, Genghis Khan beheading a mannequin with a baseball bat and Beethoven stealing the show with an exceptional solo at a piano store.

1. Napoleon at the Waterloo

Bill and Ted rewrite history when they wind up taking the legendary French general to one of San Dimas' most excellent water parks, aptly named Waterloo. Instead of experiencing a day of staggering defeat, Napoleon enjoys blasting around on countless water slides, enjoying a very different kind of "downfall."