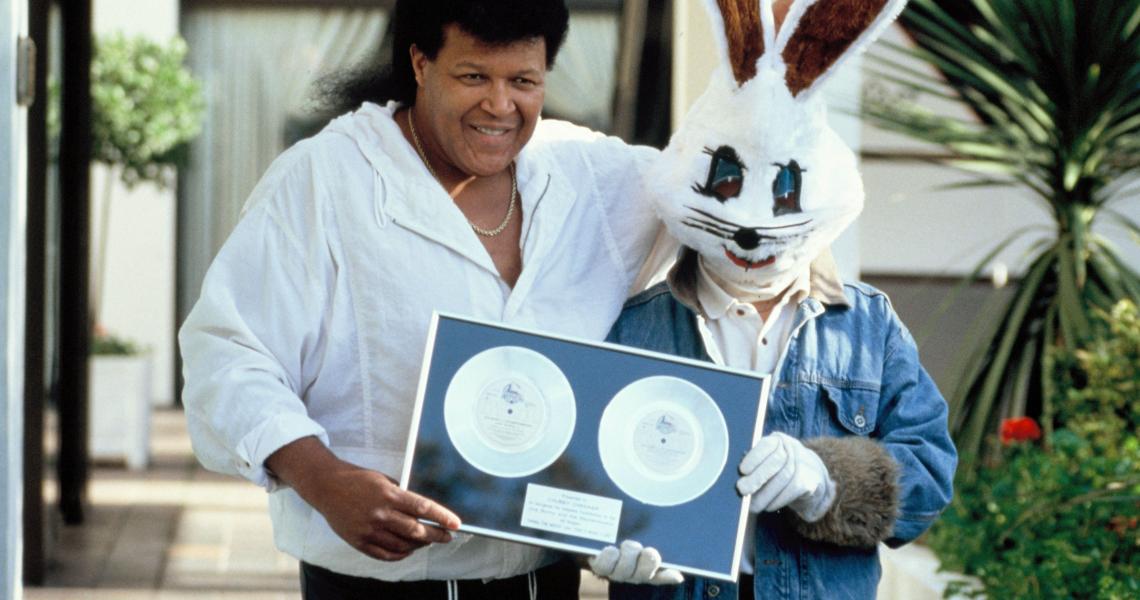 British pop charts have always been home to some weird songs. The coveted No. 1 race during the week of Christmas has seen tributes to grandmothers, cartoon themes, and Rage Against the Machine occupying the top spot. But on Oct. 21, 1989, the top song in the country was a dance mix of '50s and '60s rock tunes performed by a cartoon rabbit - it wasn't the first such chart-topper, and it wouldn't be the last.

Jive Bunny and The Mastermixers notched a trio of No. 1 hits in the U.K. during 1989: the medleys "Swing the Mood," "That's What I Like" and "Let's Party." Only two other acts had reached the top three times in one year under one band name in England: Liverpool rockers Gerry and The Pacemakers in 1963, and Frankie Goes to Hollywood in 1984.

We're sure you have a lot of questions, but the best place to start is: how did this happen? It starts with a remixer named Les Hemstock, a DJ in the employ of the Mastermix production service, one of several that would send remixes to dance clubs. The last few years had seen an incredible run of '50s and '60s nostalgia, from the time-traveling comedy Back to the Future and the teen-targeted romance of Dirty Dancing to older songs like Ben E. King's "Stand by Me" and Louis Armstrong's "What a Wonderful World" climbing back up the charts thanks to films like Stand by Me and Good Morning Vietnam.

Read More: July 1985: Huey Lewis and The News Go Back to the Future on "The Power of Love"

So Hemstock decided to mix together some major hits from the same time period - Little Richard's "Tutti Frutti," Bill Haley and The Comets' "Rock Around the Clock," and Elvis Presley's "Hound Dog" among them - bookended them with Glenn Miller's big-band standard "In the Mood," and set it all to a simple drum loop.

And that was that, until Mastermix's parent company, Music Factory, intervened. Company chairman John Pickles thought "Swing the Mood" had real hit potential, and worked with his son Andy to polish the mix and work the song into a catchy concept. "It took them five days to create 'Swing the Mood' and it took me four months to clear all the tracks," Pickles told the Associated Press of the arduous process to grant use of the sampled songs. "Nobody understood what I was talking about when I'd say, 'I want to license 20 seconds of your record.'"

Working off a nickname for another employee named Jack Bunny, "Jive Bunny" became an animated mascot for the tunes, and Andy, along with Hemstock and fellow DJ Ian Morgan, started mixing even more throwback tunes together. Other medleys included "That's What I Like," which cut together tracks like "The Twist" and surf rock classics like "Wipeout" and the theme to Hawaii Five-O, and the Christmas-themed "Let's Party," which featured Slade's "Merry Xmas Everybody" and Wizzard's "I Wish It Could Be Christmas Everyday," which was actually re-sung by frontman Roy Wood just for the mix.

After months of club play, "Swing the Mood" was released in July 1989; on August 5, it began a five-week run on top. "That's What I Like" followed for three weeks in the fall of that year, and "Let's Party" debuted at No. 1 in its first week in December, but could not keep hold of the top slot for Christmas, ceding ground to a re-recording of "Do They Know It's Christmas" by Band Aid II. Though Jive Bunny would accrue two more Top 10 hits in England in the U.K. in 1990, the party would prove to be short-lived. But on January 13, 1990 - the same week "Let's Party" fell out of the British Top 10 - "Swing the Mood" reached its peak of No. 11 on the Billboard Hot 100. (That week's chart-topper: Phil Collins' "Another Day in Paradise.")

Though Jive Bunny hasn't bothered a chart in some time, his legacy lives on in other strange novelty acts on the British charts, from Crazy Frog to LadBaby. Now that is a mood.