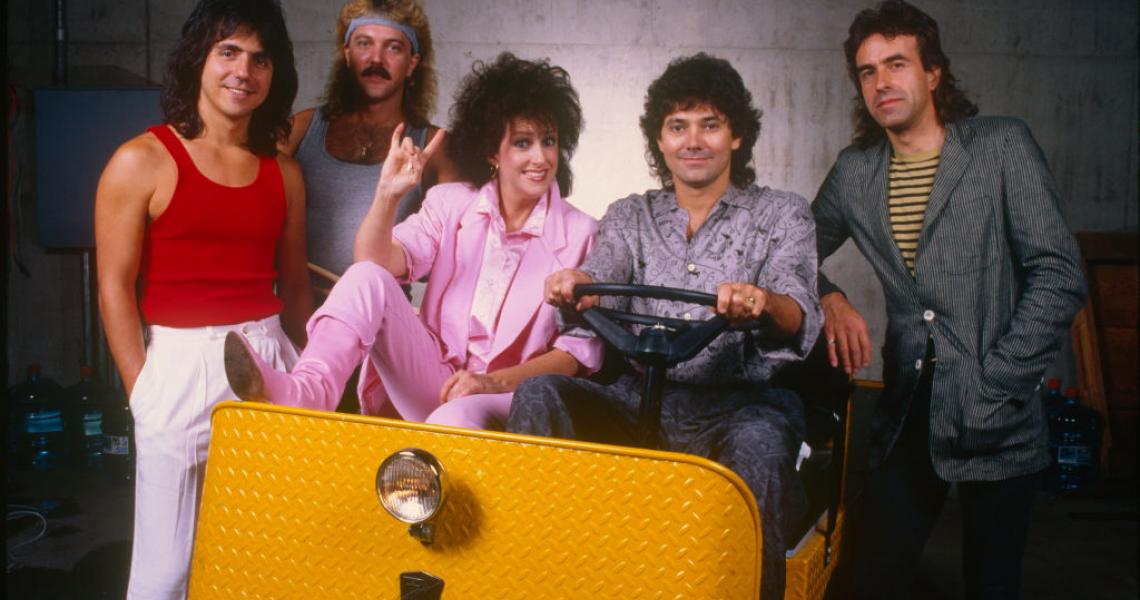 It's the song that so many people just love to hate: Starship's 1988 hit, "We Built This City." Cited as the "worst song of all-time" by numerous entities over the years, the first song released by simply Starship was the lead single from the group's 1985 LP, Knee Deep in the Hoopla, named after a line in the song.

Released on August 1, 1985, "We Built This City" rocked radio and MTV to fly up the Hot 100 to peak at #1 over the week of November 16, 1985. It held the top spot for two weeks, finally falling to Phil Collins and Marilyn Martin hit, "Separate Lives."

A look back at this controversial and divisive track that some of us actually love. What's a tasty sandwich without a little gooey cheese? Let's take a bite out of these five fun facts.

1. Grace Slick was ready to get paid
According to Knee Deep in the Hoopla executive producer Dennis Lambert, it was all about the Benjamins: "Grace Slick was the matriarch of the group, and everyone was focused on making her happy," he told GQ in 2016. "She gave me very specific marching orders: 'I want to make hits.' She told me she wanted to tour, make a lot of money, and then retire. That's how she put it."

2. In retrospect, Grace Slick thinks the song is stupid
"We built this city on rock and roll? There isn't any city built on rock and roll," she told legendary rock writer Jaan Uhelszki for Uncut magazine earlier this year. "If you're talking about L.A., that's built on oranges and oil and the movie industry. San Francisco, that's built on gold and trade. New York that's been around way longer than rock and roll. Bernie Taupin wrote the songs about clubs closing in L.A. But clubs are not going to close forever in a city like LA. So it was a pretty stupid song. And anyway everybody thought we were bragging about San Francisco which we weren't. We had three songs that went to #1 in the '80s. I didn't believe the lyrics of any of them."

3. Elton John lyricist Bernie Taupin wrote the words to "We Built This City"
As Grace Slick mentioned above, the song's lyrics were penned by none less than renowned Elton John lyricist, Bernie Taupin. "The original song was… a very dark song about how club life in L.A. was being killed off and live acts had no place to go," Taupin told GQ. "A producer named Peter Wolf—not the J. Geils Peter Wolf, but a big-time pop guy and Austrian record producer—got ahold of the demo and totally changed it.… If you heard the original demo, you wouldn't even recognize the song."

4. Martha Davis of the Motels was asked to help finish the tune
"As best I remember—and we're talking about the '80s, so I don't remember much—[Elton John lyricist] Bernie Taupin sent me the lyrics to 'We Built This City' so I could write music to it," the singer recalled to GQ. "I called Bernie and said, 'My artistic muse won't let me finish the song.' Regrets? Oh, hell no."

5. Back in 2012, Grace Slick agreed with the critics about "We Built This City."
While she was more forgiving in her 2020 Uncut interview, Slick pulled no punches when talking to Vanity Fair in 2012: "You can do any number of things in the music business aside from trying to look like you’re 25. To me it’s embarrassing. I realized that during the '80s. In the '80s we weren’t writing our own songs. It was like being in L.A. rather than San Francisco. I like to write my own stuff or have the band members write their own stuff, and we weren’t doing that. I was in my 40s and I remember thinking, God, this is just awful. But I was such an asshole for a while, I was trying to make up for it by being sober, which I was all during the '80s, which is a bizarre decade to be sober in. So I was trying to make it up to the band by being a good girl. Here, we’re going to sing this song, 'We Built This City on Rock & Roll.' Oh you’re shitting me, that’s the worst song ever. I could do it, I could get up and imitate myself, but that doesn’t feel right."