Totally Sweet: The Top Ten Candies of the 80's 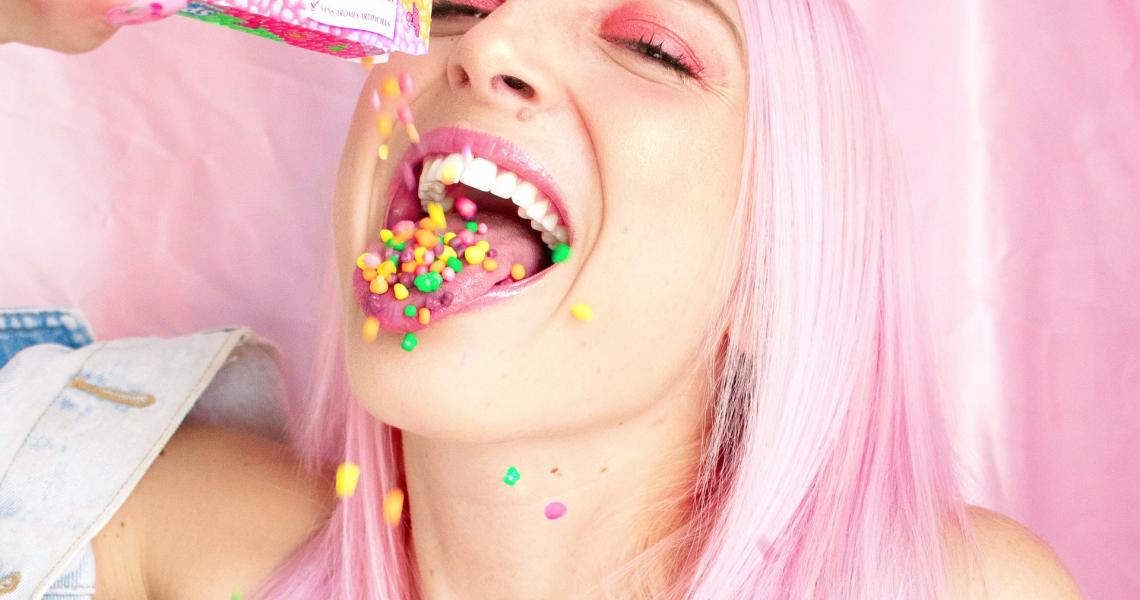 Sweets were colorful, elaborate, and totally-with-it in the decade of synth-pop. From the nerds to the airheads, there was a perfect sugary concoction fit for every member of The Breakfast Club. Neon colors were a cool statement and candy was no exception to this trend. Here are 10 reasons why being an 80's kid was pretty sweet. 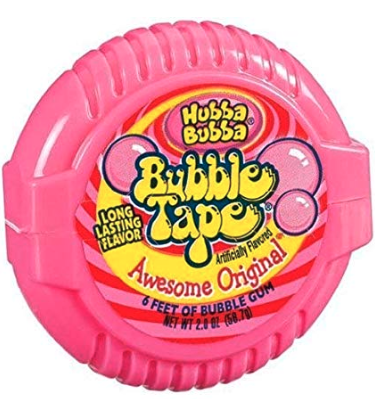 Having a bubble gum phase is part of growing up as a kid. Introduced in 1988, the Hubba Bubba Tape rolls could fit perfectly in your pocket or in your Care Bears lunch box. With a mantra like, "Six feet of bubble gum - for you, not them" and "them" referring to both parents and adults, kids all over the nation went on a roll. Sure, the flavor didn't last more than three minutes, but that's what the remaining six feet were for... 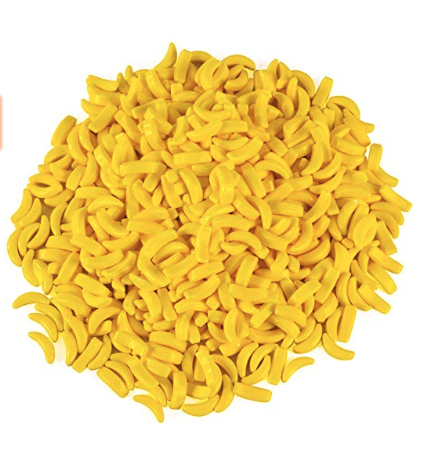 This 1982 crunchy confection was not for the fearful nor lazy. The banana flavor was undoubtedly polarizing - you either couldn't get enough of these banana runts or you couldn't stand the sight of the yellow suckers. Those who did enjoy the snack did so enough to run along to the mall (or if we're being honest, hitch a ride with mom) and disparage the Bananarama dispenser to get a good fill.

BONUS TRIVIA: Debuting just a year before the candy in 1981, Bananarama was one of the biggest girl groups of the 80's, filling the scene with irresistible pop classics and punk attitude. The English trio dominated Billboard's Top Ten in the UK between 1982 and 1988 with hit singles like "Cruel Summer." Feels good to say you could eat your bananarama and listen to it too! 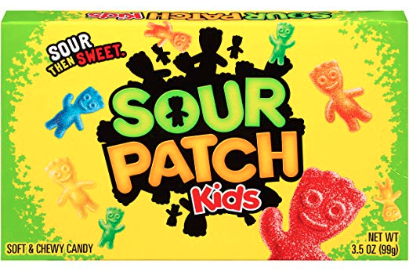 These soft snacks made their debut in the states by 1985. Creator Frank Galatolie initially launched the sweet-then-sour gummies as "Mars Men," but became inspired by the craze of the Cabbage Patch Dolls rampant in 1983. While you might know the raw feeling that occurs in your mouth after chewing on one-too-many of these sour kiddos, you might not have known that the original mascot of the candy was Galatolie's son Scott, featured on the packaging with his tongue sticking out. 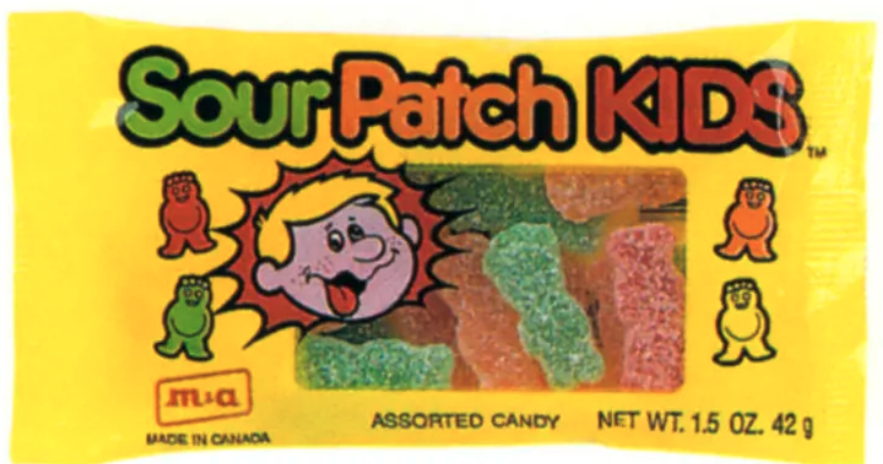 First introduced in 1978, the only thing more fun than eating the Hershey peanut-flavored layers of chocolate and caramel was boasting about having one just so you could say the name over and over again during recess.

It tasted just as good just as it sounded - and singing the jingle was equally as addicting. 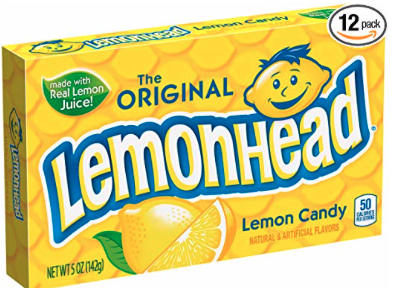 Lemonheads hit the American market through the Ferrara Candy Company for the first time back in 1962, but has remained popular for decades since. The credit of creating the bright, tart yellow sensation goes to Nello Ferrera, whose creativity sparked when witnessing the birth of his son, Salvatore Ferrera.

"He always claimed that when I was born, that I came out of my mother sideways," said the younger Mr. Ferrera to The New York Times in 2012. "And my heart was shaped like a lemon." 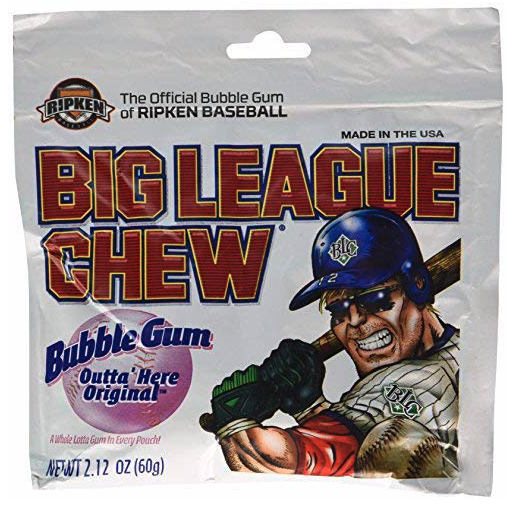 The juicy gum for both kids and adults, Big League Chew came from the legendary minor league team, the independent Portland Mavericks, by pitcher Rob Nelson. His teammate (former NY Yankee all-star) Jim Bouton then pitched the product to Wrigley and now, baseball fans and families who grew up chewing Big League Chew can thank the two for "The Sandlot" feel of chewing gum from a pouch. 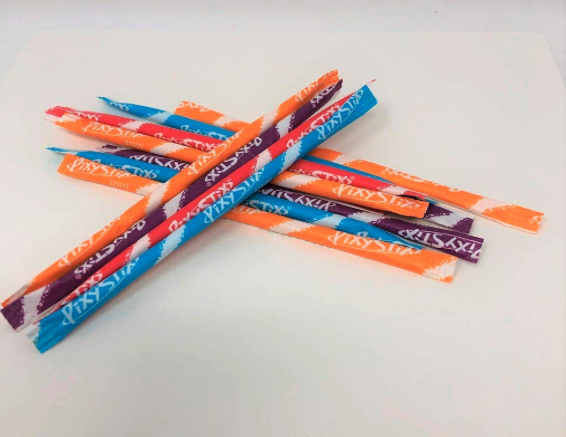 Another treat that ranks high in our 80's totem pole of sweet goodness is Pixy Styx. Was it the fact that actress Ally Sheedy (playing Allison) invented the infamous Pixy Styx sandwich, already filled with gummy lizards, cereal and butter, while filming The Breakfast Club?

Or is it the inexplicable feel-good sensation of watching magical bits of sugar pour from the paper packaging? Whatever it may be, Pixy Styx stuck around through the 80's and if it wasn't already clear - kids proved their love of eating sugar straight from the tube. 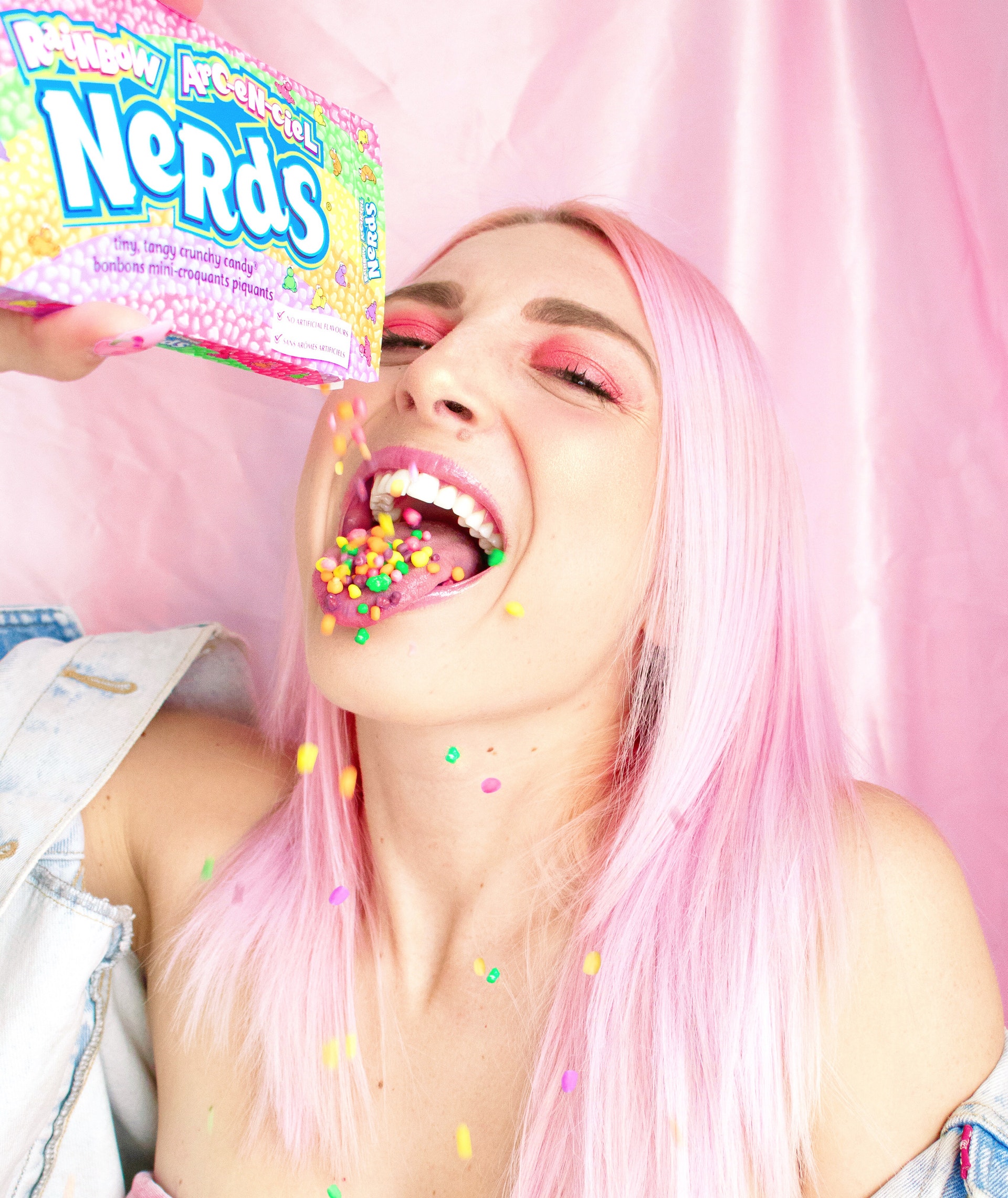 These little Willy Wonka nuggets made their colorful debut in 1983, invented by Angelo Fraggos. The little treats originally came in two flavors, Cherry/Orange and Strawberry/Grape. The fun-thinking packaging came in two-toned compartments - because who wants to pick just one? Both the moon shape and neon color helped drive the immense popularity of the candy, and in 1985, Nerds received the honorable recognition as "Candy of the Year" by the National Candy Wholesalers Association. It's an A+ from us.

BONUS TRIVIA: For a brief moment, there existed a Nerds Cereal that stayed true to the duel flavor and divider component of the candy. However entertaining the commercials were, the sales of the breakfast cereal were disappointing and they dissolved into a legendary whisper of better times past. We're gonna have to pour out a glass of milk for this one... 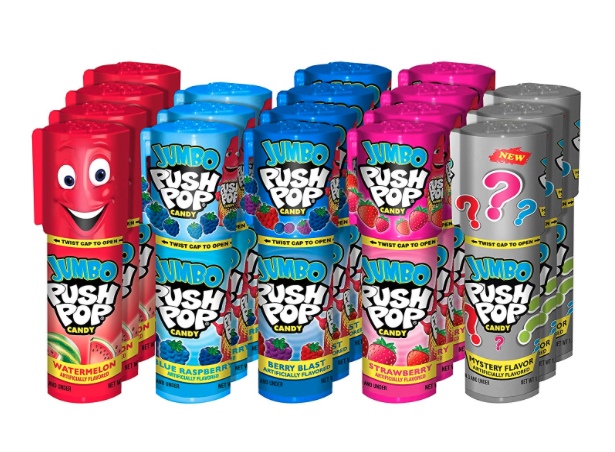 This 1986 candy was dangerous, available in classic fruit flavors like Watermelon, Cherry, Strawberry, Blue Raspberry, and Twisted Berry Blast for the adventurous. If you've ever sucked the sugar sword to its very end without chomping off a chunk, you know how pointy the tip of the pop can get, so it was sometimes a two-sided feat to finish the journey without slicing off your tongue. One of the greatest things about this sucker was its catering to kids on-the-go, was there a handier invention than taking a lollipop on-the-road? 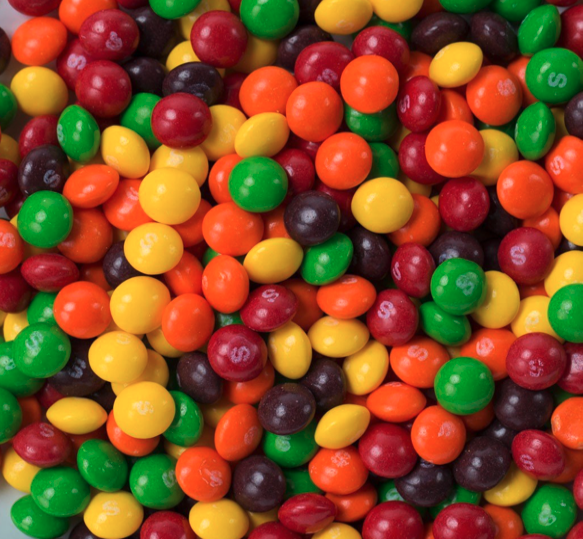 Americans got their first "taste [of] the rainbow" in late 1979, but 1982 was the glorious year during which official Skittles candy production began in the states. Since 2000, Skittles has branched out to to launch insane collabs and new products, including Skittles Slurpees, Sour Skittles and Skittles Bubble gum. Welcome to the whole new world of Skittles, folks! 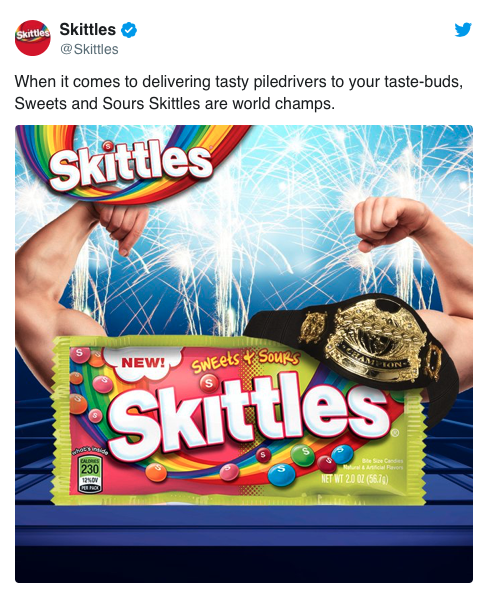 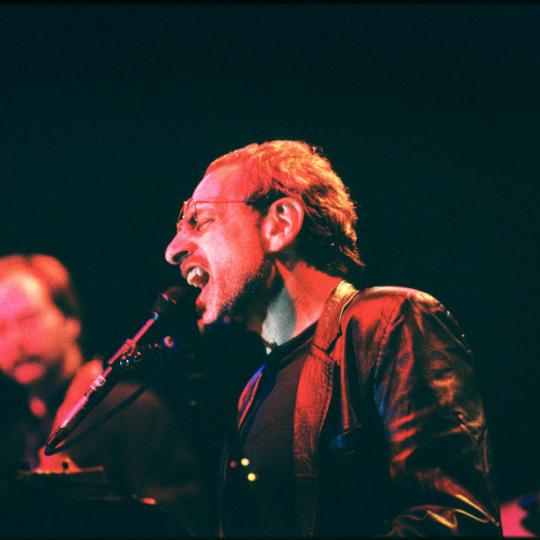 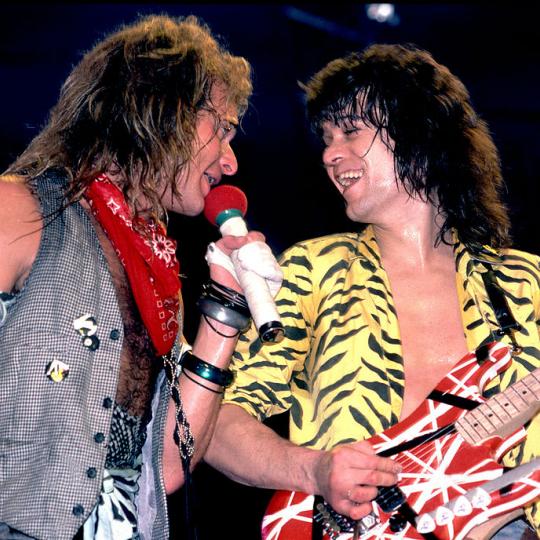 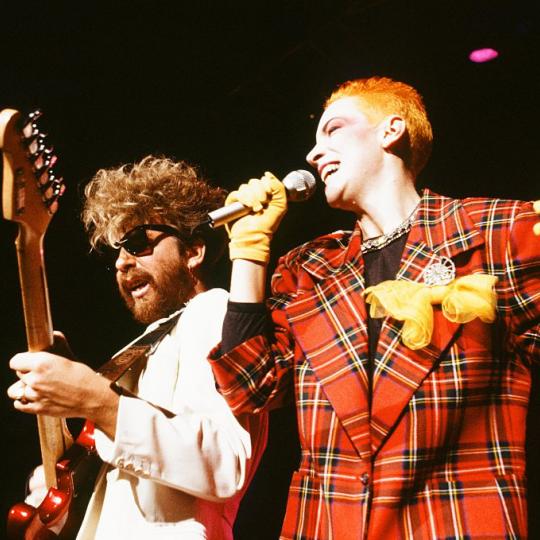